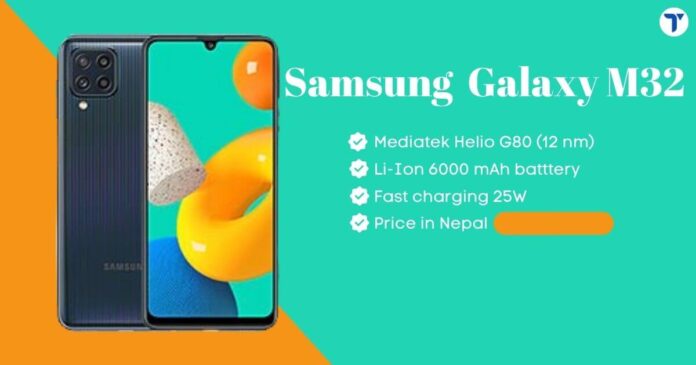 Samsung Galaxy M32 is a budget-friendly smartphone. Likewise, it has a massive battery, a bright screen, and a good camera. The smartphone has good overall performance. Let us find out the details of the smartphone.

Samsung Galaxy M32 sports a 6.4-inches Infinity-U Display. It has an FHD+ sAMOLED display. Similarly, the display has a refresh rate of 90Hz. The smartphone has a nits brightness of 800.

Housing the selfie camera is a dewdrop notch on the top-center of the display. The notch-type selfie coming from the brand is disappointing as other brands have already opted for the punch hole selfie even in the budget segment smartphone.

The rear section houses a quad-camera setup on the top-left corner within a rectangular module. Similarly, the smartphone is available in two color variations: Black and Light Blue. It weighs 196 grams.

For biometrics, it has a side-mounted fingerprint sensor embedded in the power button.

Powering the smartphone is the MediaTek G80 processor. It is an octa-core processor consisting of two Cortex-A75, clocking at 2.0 GHz and six Cortex-A55 with a clocking speed of 1.8 GHz.

It lets you multitask or surf in a snap. The chipset further combines with 6 or 4 GB of RAM, which in turn combines with 128 GB and 64 GB of internal storage, respectively. The in-house memory is expandable up to 1TB via a microSD card.

On the software front, the smartphone runs on Android 11 on top of One UI 3.1.

The smartphone features a quad camera setup on the rear panel. The main camera is 64 MP with a lens of f/1.8. Likewise, the ultra-wide camera is an 8 MP sensor with a 123-degree field of view and a lens of f/2.2. Likewise, the other two cameras are macro and depth with 2 MP each.

On the front, the smartphone flaunts a 20 MP Selfie camera. The selfie camera has a lens of f/2.2. It has customized filters.

Both the cameras can record the video in 1080p at 30 frames per second.

Samsung Galaxy M32 has a 6,000 mAh battery with a 15W charger in the box. The battery also supports fast charging of 25W.

The authorized distributors of the Samsung devices in Nepal are Integrated Mobility Solutions (IMS) and Him Electronic Pvt. Ltd. You can purchase the smartphone from authorized retail stores or any online stores in Nepal.

Meanwhile, you can check out the other smartphone within a similar price range and are already available in Nepal, such as Redmi Note 9 Pro, Redmi Note 10, Samsung Galaxy M12, and Infinix Note 8i.

Oppo A15 With Triple Camera And Helio P35 Chipset Launched in...