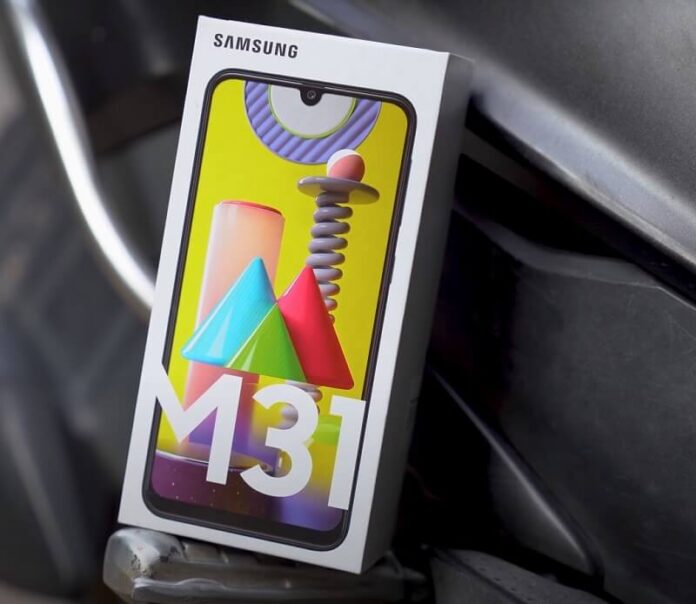 Despite being crowded with A series and M series smartphones, Samsung has added a new huge battery phone, Galaxy M31, in its M series. The phone is launched in the first month of 2020 amidst the lockdown. It seems like even Covid-19 cannot stop Samsung from providing the new phones to its users. Set to compete against Redmi Note 9 Pro and Pro Max, the device has some improvements to its features and makes a place among the best smartphones under 40,000 in Nepal. Let’s look at its specifications, memory, camera, and most importantly, Nepal’s price.

Samsung has been offering a great deal to its users in M-series smartphones. Among them, Galaxy 31 seems to outperform them till now. Along with the latest trends, Samsung Galaxy M31 has similar specifications to its M30s. The successor to its last year’s Galaxy M30s, the phone comes with a 6.4-inch Super AMOLED screen and a huge 6000mAh battery.

Samsung Galaxy M31 looks quite plain with no gradient or glossy pattern to its back in terms of design. With no to little improvement to its design, the phone has a plastic panel, which picks up the fingerprints and scratches easily. So, I would suggest you protect your phone with available covers.

As a successor, the major difference in Galaxy M31 is the phone has a wider camera module. Apart from these, the phones come in darker colors like Black and Blue.
There is a waterdrop notch at the top at the front, housing for the selfie camera. Despite weighing 191g weight and 8.9 mm of thickness, the phone is quite comfortable for its users. The power button and volume keys are right, whereas there’s a card tray on the left for two Nano-SIMs and a microSD card.

Talking about the display, Samsung ships with a 6.4 inch Super AMOLED Full HD+ display with a Full HD+ resolution of 1080 x 2340 pixels. This time Galaxy M31 has added Corning Gorilla Glass 3 on the front for protection. No worries about the scratches anymore on the screen. Due to its peak brightness of 420 nits, the phone can be used very easily, even on a broad light day.

Under the hood, the phone uses the same old Exynos 9611 processor as in its predecessor M30s. However, the phone runs smoothly during its daily usage of it. With the use of Mali-G72 MP3, this device’s gaming performance is also smooth. Samsung’s competitors have already started offering powerful chipsets within the same price range.

It would be much more efficient if Samsung becomes conscious of their budget phone processors. The phone runs on Android 10, One UI 2.0, which brings several fascinating features but does not have a screen recording option.

To end the era of ¾ GB of RAM, Samsung has finally added 6/8GB of RAM in Galaxy M31. However, there are only 128GB of UFS 2.1 storage variants available in Nepal. You don’t have to worry about the storage as the phone is expandable using a microSD card.

Talking about the cameras, Samsung Galaxy M31 comes with an upgraded version to its predecessors. The quad cameras at the back are arranged in a rectangular module. There is a 64MP of primary camera, an 8MP ultra-wide-angle camera, a 5MP macro camera, and a 5 MP of depth sensor.

With the use of Samsung’s own ISOCELL GW1 sensor, you can expect beautiful and detailed photographs through the primary lens. The phone also has live focus and night modes, which lets you take memorable pictures during day and night time.

On the front, there is a 32 MP of selfie camera with a Sony IM616 sensor and f/2.0 aperture, which is an upgrade to its predecessor’s M30s camera.

The legacy of M30s continues with the battery of M31 having the #MegaMonster 6000mAh battery. The phone lasts straight up to two days for normal usage. Even though M31 had carried the legacy, Samsung should have also focused its eyes on charging. It almost takes 2 and half hours to fuel up the battery from nil to 100% using 15W of the charger. I think Samsung must look at these small things on their upcoming phones.

The price of the Samsung Galaxy M51 price in Nepal is Rs. 29,999 for the 6/128GB and Rs. 34,999 for the 8/128GB variant. Samsung Galaxy is available in authorized Samsung stores throughout Nepal. Purchase and feel the smoothness of it.