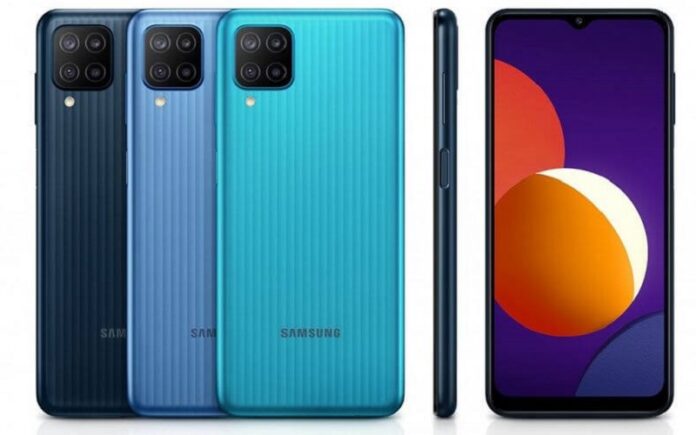 Samsung is known for its vast smartphone range from simple entry-level phones to ultra-premium foldable smartphones. The A-series and M-series lineup from the company focuses on the budget and midrange oriented market. The company has added a new device in its M series lineup, the Galaxy M12, which comes as the successor to the last year’s Galaxy M11 and is based on the Galaxy A12.

The Galaxy M12 is a budget-friendly option from Samsung, with similar specs and designs as the Galaxy A12, with a massive 6000 mAh battery. The device comes as a successor to the M11 and has brought massive improvement over its predecessor.

The device has a plastic body measuring 9.7 mm in thickness and weighs 221 grams. The plastic back has a metallic touch with a square camera module to house the rear camera setup. The fingerprint sensor is side-mounted on the device’s right frame, doubling its power button.

It offers a 6.5 inches PLS IPS display with HD resolution of 720 x 1600 pixels in a tall aspect ratio of 20:9. The display is surrounded by thin bezels with a very noticeable bezel on the bottom chin and features a waterdrop notch to house the selfie camera.

The device comes in many memory configuration options, including 3 GB RAM coupled with 32 GB of internal storage, 4 GB RAM with 64 GB storage and 6 GB RAM with 128 GB internal storage. The storage can be extended to 1 TB with the dedicated microSD card slot. The phone ships with One UI 3.0 based on Android 11 out of the box.

Both the front and the back camera setup can take up to 1080p videos at 30 fps.

The M12 packs a massive 6000 mAh battery that can easily last 2-3 days of moderate usage along with the support of 15W fast charging over USB type C. The company claims that a single full charge can last the device 24 hours of web browsing over Wi-Fi, or 23 hours of playing videos and nearly five days for music.

The official distributors of Samsung’s smartphone in Nepal are Hims Electronics and Integrated Mobility Solutions Pvt. Ltd. (IMS). You can purchase the smartphone from online stores or official offline stores near you.