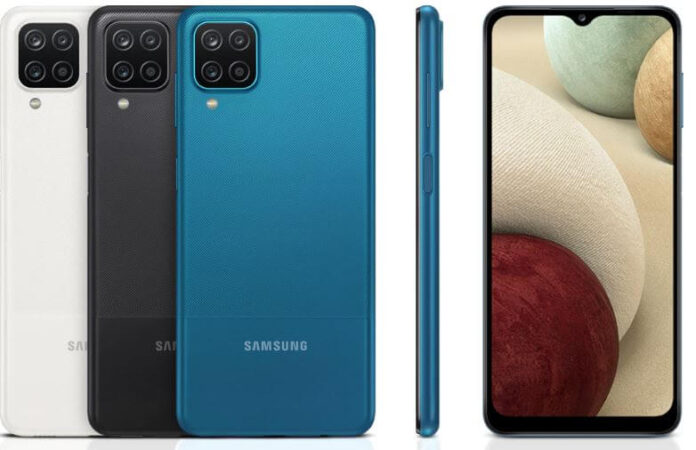 Samsung Galaxy A12 – the successor to the Samsung Galaxy A11, offers various storage combinations and packs a good battery with excellent battery life. The quad-camera setup at the rear can be the selling point for the phone. Ultra-wide camera in this budget segment is very rare, but the phone has one. The phone also supports dual nano-SIM and a microSD card at the same time.

The phone is mostly made out of plastic, where the back covers the periphery of the device. It has a diagonal stripes texture on the rear with Samsung branding at the bottom, helping maintain a strong grip. It possesses a quad-camera setup on the rear, inside a square module with LED flash just below it on the top corner at the left.

The front houses a selfie camera inside a u-shaped notch; above, there is an invisible earpiece. Surrounded by reasonably thin bezels, the chin has particularly thick bezels. However, the bezels don’t give a cheaper look to the phone.

We get a power button on the right and the volume rockers above it. The left edge has a SIM tray for two Nano SIMs and a microSD card. Similarly, the bottom has a USB Type-C port, 3.5mm headphone jack, loudspeaker, and a primary microphone. A lone secondary mic is at the top.

A fingerprint sensor is combined with the power button, which is a bit harder to reach but works accurately. Alternatively, it has face recognition, which is camera-based without 3D face scanning.

With the processor available in the phone, you can expect an average performance from the phone.

Samsung Galaxy A12 runs Android 10 out of the box based on One UI 2.5. It has a dark mode as well. The smartphone’s UI is similar to the other offering from the brand in the same budget segment.

The primary camera has an f/2.0 aperture, ultra-wide has an aperture of f/2.2, and the remaining two macro and depth cameras have an aperture of f/2.2 each. The camera app on the Samsung Galaxy A12 is similar to its other offerings in the same budget range.

The default image resolution for the primary camera is 12 MP. The dynamic range is extremely wide. Similarly, the camera’s daylight photo is sharp and accurate with enough details, while the low-light picture is not spectacular. It has a live focus mode for the portrait.

The selfie camera on the front is an 8 MP snapper with an f/2.2 aperture. The selfie from the smartphone is good in decent daylight.

Video from both cameras is recordable with a resolution of 1080p at 30fps; just a basic. The video stabilization of the phone is low but average in this budget segment.

The smartphone packs Li-Po 5000 mAh battery. It supports fast charging of 15W. The battery gets a full charge in around three hours, while 20% of the charge takes 30 minutes.

Samsung Galaxy A12 Price in Nepal and Availability

The phone launched in Nepal on 7th March. The price of Samsung Galaxy A12 in Nepal is NPR 18,999 for 4/64 GB variant and NPR 19,999 for 4/128 GB variant. The official distributors of Samsung smartphones in Nepal are IMS (Integrated Mobility Solutions) and Him Electronics Pvt. Ltd. The phone is available for purchase, you can get it from offline retail stores and online stores.

Other options for the same price range can be Redmi Note 9 and Realme 7. Though Realme 7 is a bit higher in price, the phone offers good performance for your budget.