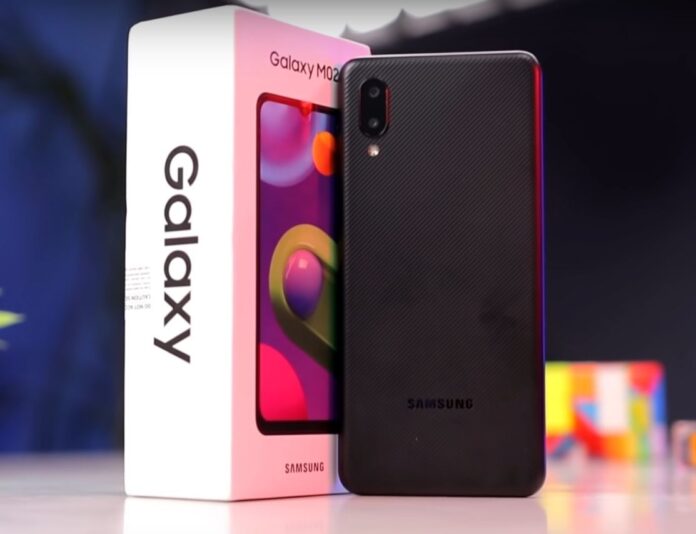 Samsung Galaxy M02 is the company’s latest affordable phone in the Galaxy M series. The phone is the successor of the Galaxy M01 launched in June last year. Having dual cameras at the back, the phone shares a similar feature to the recently launched Samsung Galaxy A02.

The phone comes with 6.5 inches PLS IPS display screen. It has an Infinity-V display with an HD+ resolution of 720 x 1600 pixels in a 20:9 aspect ratio. The display seems quite appreciable for the budget. However, due to its noticeable thick chin at the bottom, the screen-to-body ratio is only 81.9%.

At the back panel, there is a pair of the camera resided inside a pill-shaped module. The cameras are arranged vertically along with an LED flashlight. Likewise, the panel has a textured design for a comfortable grip. The phone weighs only 206g as it is built upon the plastic back and plastic frame. The phone comes in four colors: Black, Grey, Blue, and Red.

Under the hood, the phone is powered by a Mediatek MT6739W chipset over Snapdragon 450 on Galaxy M02s. For the processing part, the device is supported by the Quad-core processor which clocks at the speed of 1.5GHz. The graphics are handled by PowerVR GE8100 GPU.

Along with the chipset, the phone comes in two memory variants. 2/3GB RAM whereas, for the storage, the phone has only one option: 32GB in-built storage. However, the latter is expandable up to 1TB using an external microSD card. The phone is built on Android 10 with One UI 2.0 on top of it.

For photos and videos, the phone has three cameras setup: Two at the back and one at the front. The rear panel comprises of 13MP primary sensor of f/1.9 aperture and a 2MP macro sensor of f/2.4 aperture. However, it lacks the 2MP depth sensor like in M02s.

On the front, the phone comes with a 5MP lens for the selfie enthusiast. With the rear camera, you can click HD videos at 30fps.

The most appreciable part of this phone is its massive 5000mAh battery. With the huge battery, the phone is capable to live up to a day without charging. The phone can be charged with a micro USB port although there is no fast charging support.

For the connectivity part, the phone includes 4G LTE, Wi-Fi, Bluetooth, GPS/ A-GPS, and microUSB2.0. The other sensors include Accelerometer and proximity.

Given its price, the Samsung Galaxy M02 competes against Infinix Hot 9 Play and Redmi 9A.