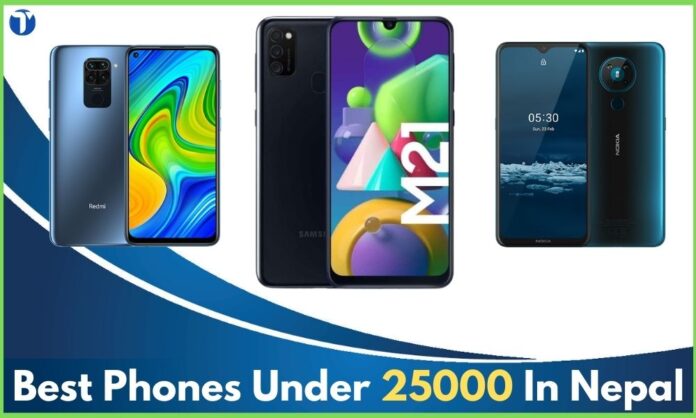 Smartphone under 25000 has most of the consumers in Nepal. The market of the phone in the mid-range budget segment is quite competitive. Numbers of brands target the consumers of this segment. Hence, it gives the consumer a plethora of options and creates tough competition among the brands. However, a large number of options can cause a lot of confusion for the buyers. It becomes tough to choose one when you have multiple options with outstanding features with each. Therefore, after a fair amount of research, we help you decide to buy the best phone under 25000 a little easy.

Brands like Samsung, Xiaomi, Realme, and Oppo have introduced some great offerings in the phones’ mid-range segment. Their main target to sustain among the average user is what makes their products best. They offer the right balance between a powerful processor and useful features. However, we should not always go for the brands and look for some other dark horses in the race too. Find out what are the best phones under 25000 in Nepal below.

Best smartphones Under Rs 25000 in Nepal

A successor to Galaxy M20, Samsung Galaxy M21 is a variant of Galaxy M31, a variant of Galaxy M30s. Hence the three phones are identical. The M series of Samsung covers the entry-level segment. M21 was launched on 18th March 2020. It has a good battery life, decent camera, and processors. Since the early days, the band has been bringing the good phone in the mid-range segment for the consumers.

M21 has a triple-camera setup at the rear: 48MP primary camera, 8MP ultra-wide camera, and a 2MP depth camera. The selfie is a 20MP camera inside a U-shaped notch. Powering the phone is Samsung’s in-house chipset Exynos 9611.

The phone packs either 4GB RAM with 64GB internal storage or 6GB RAM with 128 inbuilt storage. M21 runs on the Android 10 operating system. Similarly, the battery of 6000 mAh is enormous. It also has a fingerprint sensor at the rear, working fast and accurately.

The phone was launched on 30th April 2020. Redmi Note 9 is a power-packed phone from Xiaomi. It has a powerful battery, with a premium design and an impressive camera. Similarly, the phone is the successor to the Redmi Note 8, which had many consumers. Since Note 8 was also able to make adequate space in the smartphone market, Note 9 has features to continue to be the best.

The quad-camera on the rear features an 8MP ultra-wide snapper, a 48MP primary camera, a 2MP depth sensor, and a 2MP macro camera, while the selfie is a 13MP lens. It has a MediaTek Helio G85 chipset, which is a gaming-centric. Similarly, the phone has three variants for RAM and inbuilt storage: 4/64GB, 4/128GB, and 6/128GB. Note 9 has both a fingerprint sensor and face unlock. The phone’s Operating System is Android 10 with MIUI 12 on the top. Likewise, it has a 5020 mAh battery, supporting 22.5W fast charging. It also supports reverse charging of 9W.

Infinix Note 8i was launched on 15th October 2020. The brand had recently launched two smartphones under its 8 series – Infinix Note 8 and Infinix Note 8i. Note 8i is one of the best offerings from the company. Let’s find out what makes it stand in the top 3.

With the Android 10 operating system, the phone has an octa-core processor. Likewise, Mali-G52 MC2 handles the graphics in the system. The memory variant of 4GB/128GB and 6GB/128GB is available, expandable via microSDXC card. The rear camera has a 48MP wide camera, 2MP macro sensor, 2MP depth sensor, and 2MP camera at the rear. On the front, it has 8MP selfie snapper with a dual-LED flash. And the 5200 mAh battery with 18W fast charging fuels the phone. Infinix Note 8i has both faces unlock and fingerprint sensor.

Infinix Note 8i price in Nepal is NPR 21,490 for 6/128GB. The phone’s best features are its excellent gaming performance, a large battery with fast charging, and a slow-motion camera. The phone could have gone one step up in the list, but its selfie camera is what makes it sit back.

Xiaomi continues to give the best value for the money you spend. And the same is the case for Mi A3, with 6.08 inches HD+ AMOLED display with a Corning Gorilla Glass 5 on the top. It also proudly flaunts the in-display fingerprint sensor, making it affordable to feature modern features.

A new Snapdragon 665 chipset gives a good performance pairing with Adreno 610 GPU under the hood. Mi A3 runs Android 9.0 Pie, part of the Android One program. Similarly, the camera has a triple sensor giving some great pictures featuring a 48MP primary camera, an 8MP ultra-wide camera, and a 2MP depth sensor. On the front of the device, it has a 32MP selfie camera. Finally, a large battery of 4030 mAh gives an excellent day to day performance.

Xiaomi Mi A3’s price in Nepal is NPR 23,999 for the 4/64GB variant. The phone is premium with an OLED screen and under-display fingerprint scanner. Also, from Mi A2 to Mi A3, the cameras are now improved, and the chipset is modern. However, the 720p screen may disappoint you in video browsing while it works fine in gaming.

Realme 6i is a good budget smartphone in the market, but not the best. It offers fair gaming on a large screen with Gorilla Glass 3 protection and a rear-mounted fingerprint sensor.

The phones’ performance power comes from MediaTek Helio G80 with an octa-core processor. Mali-G52 handles the graphics. The phone’s RAM and internal storage combination are 3GB/64GB and 4GB/128GB that are expandable through a microSDXC card. Similarly, the camera combination on the rear is 48MP+ 8MP+2MP+2MP. On the other hand, the selfie is 16MP. Additionally, Realme 6i packs a massive battery of 5000 mAh supporting 18W Fast Charging and reverse charging.

The new price of Realme 6i in Nepal is NPR 23,990 for 4/128GB. The powerful battery with fast and reverse charging is commendable. When comparing the phone with its competitors, Realme 6i outperforms in the gaming aspect and sometimes in picture quality. So, the phone deserves to be on the list.

Nokia 5.3 in the list is good news for the loyal Nokia fans. The phone is a part of the Android One program, giving a bloat-free device with regular updates for a few years. Hence, you don’t need to worry about getting behind in software. The 6.55-inch display gives you enough space for watching movies and web browsing.

Powering the phone is Snapdragon 665 with Adreno 610 GPU. Nokia 5.3 boots Android 10. The quad-camera will surprise you with the quality of the pictures it produces. You get a quad-camera in the rear having a 13MP primary camera, a 5MP wide-angle camera, a 2MP depth sensor, and a 2MP macro lens. On the back, you will also find a fingerprint scanner. The handset has an average 4000 mAh battery supporting 10W charging.

The price for Nokia 5.3 in Nepal is NPR 23,499 for 4/64GB. It is worth a spot on the list as it performs well, covering the fundamentals, giving value for the money you spend.

Launched on 7th May 2020, Vivo Y30 is a stylish design and camera. Not all the features are unique, but you can still consider the phone to be on your list before deciding.

The price for Vivo Y30 in Nepal is NPR 25,999. Vivo Y30 has user-centric features with a massive battery, the phone’s bright side making it into the best phones under 25000.

Oppo, well known for manufacturing smartphones, especially targeting the young generation, has made a little disappointment in the phone display this time. However, with a 5000 mAh battery, fingerprint sensor and face unlock, and good primary camera, Oppo can secure its place on the list of budget segment phone

Oppo A5 2020 powered by Qualcomm Snapdragon 665 chipset and has 3GB RAM with 64GB internal storage, expandable up to 256GB. Similarly, the GPU is Adreno 610. The combination gives good gaming performance, but you should not expect the performance to be like what flagship devices offer. The smartphone runs on Android 9 (Pie) OS. A5 2020 flaunts an 8MP selfie camera, 12MP primary camera, an 8MP ultra-wide camera, while the others are for adding bokeh and effects to the pictures

The price of Oppo A5 (2020) in Nepal is NPR 22,990 for 3/64GB. The display is a disappointment as there is neither Full HD+ nor AMOLED. But the regular user can still be satisfied with its excellent speaker supporting Dolby Atmos.

Features to be considered before buying phones under Rs 25000

You may have heard about phones with a metal build or plastic build. Even the glass-coated panels are available. But if you are prone to dropping your phone, do not buy the glass builds.

The display’s size and resolution should be considered according to your usage of the devices. If you use the phone for videos streaming, viewing movies, consider at least 5.7 inches display with FullHD+, QHD or even better if you get an AMOLED display. An average user can be okay with even 5.5 inch HD or FullHD display.

A simple rule for considering the phone’s processor is if you are a heavy user go for the higher speed which is expressed in term of GHz. Qualcomm and Mediatek are safe while Samsung has its own Exynos, which is also good.

A big myth about the camera: higher megapixels means a better camera. It is entirely a myth and do not get fooled by the higher pixels’ advertisement. Factors like aperture, ISO level, autofocus, pixel sizes and others are essential to be considered.

The most crucial factor to look for is battery life, keep in mind that higher mAh doesn’t mean more battery life or longer battery life cycle. These days, a 4000 mAh battery can completely satisfy you. You can also check the devices’ reviews and benchmark results before buying the phone.

UI and OS are also vital factors in choosing your budget’s best phone. One should always pick the UI that is easy to use, as the interaction with the phone should be quick each time you have to access certain things. However, it also depends upon how fast you can adapt to the interface. The latest OS can always be better and even better if you could upgrade to the newest and latest version in the upcoming years.

Storage of the phone is mostly occupied by the apps present in the phone, so before you buy the phone, be sure about what types of apps and the number of apps you want to install on your devices always to have some extra spaces available. Also, it is good to have expandable memory through SD card.

If you have to store large files and apps, go for 64GB or 128GB variants.

Security and other features

If you heavily rely upon video streaming and conferences, speakers and the audio quality are other significant factors to consider before buying phones. Buy the smartphones with front facing speakers, if you are more into the audio and video related kinds of stuff.

But if you are an average user, bottom-firing speaker or even speakers at the back works fine.

You may feel it doesn’t matter for any ports for smartphones, but having some standard ports can be future proof. As we have realized, many manufacturers have now started to switch to the USB Type-C based headphones jack. Looking at the future, we can expect the 3.5mm headphone jack to be ditched by most of the brans.