Leica launched Leitz Phone 1 as the First Smartphone from the Brand, Exclusive to Japan 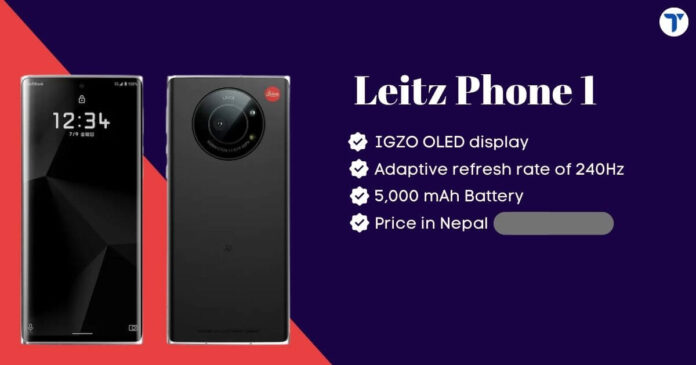 Leica has unveiled its first phone in the Japanese market as Leitz Phone 1 on 17th June 2021. It is the first self-branded smartphone from the brand, exclusive to Japan. The price of Leitz Phone 1 in Japan is JPY 187,920 (around NPR 2,01,671). The smartphone has a hefty sensor for photography; it also has 5G capabilities.

The phone’s internals are similar to the recently launched smartphone – Aquos R6, which is also exclusive to Japan. The only difference between the two smartphones is the phone’s design which now has a circular camera.

Leitz Phone 1 has a 6.6-inches IGZO OLED display. The smartphone has a resolution of 2,730 x 1,260 pixels and an adaptive refresh rate of 240Hz. Likewise, Leitz Phone 1 features the Leica Silver Metallic body with a thickness of 9.5 mm.

The rear panel has a massive 1-inch camera sensor. It also has a Leica-branded cover for the camera lens. Likewise, the smartphone has a matt black glass cover on the rear.

The smartphone also has an IP68 rating for dust and water resistance. It weighs 212 grams. Likewise, the smartphone is available in Black color only.

Powering the smartphone is a Snapdragon 888 with a fabrication process of 5 nm. It combines with 12 GB of RAM and 256 GB of inbuilt storage. The internal memory is expandable via a microSD card for up to 1TB. Likewise, the RAM type is LPDDR5.

Leitz Phone 1 runs Android 11 based on the brand’s custom interface on top; the interface is called “largely monochrome.”

While almost all smartphones opt for more than one camera on the rear side, Leica has a single main camera. The main camera is a 20 MP sensor with an aperture of f/1.9 and a focal length of 19 mm. Also, the camera is a full 1-inch in size, which is larger than the primary camera on every other smartphone.

Since the camera includes a metallic cover, it is far from scratch while keeping on the desk or even in your pocket. For capturing the black and white picture, a monochrome mode is also available.

Fueling the Leitz Phone 1 is a 5,000 mAh battery. It supports Intelligent charge 2.0.

The price of Leitz Phone 1 in Japan is JPY 187,920. Since the smartphone is exclusive to Japan, we do not expect its launch here in Nepal. Also, there is no information about the launch of the smartphone in other parts of the world.

Meanwhile you can check other smartphones available in Nepal such as Xiaomi Mi 11X Pro, Realme 8, Nokia C20.

Symphony Nepal Launches Symphony Z32 in Nepal Along with other Smartphones