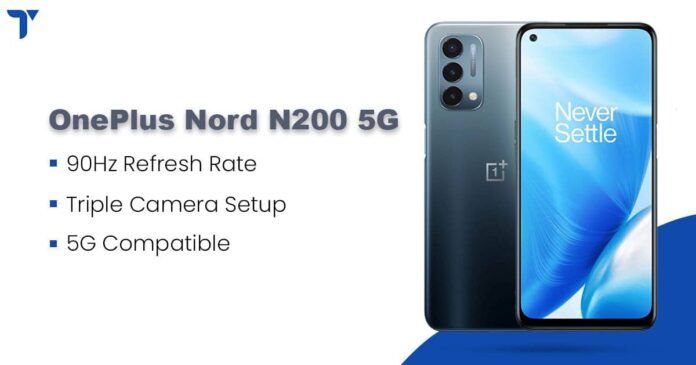 OnePlus Nord N200 5G will soon hit the US market as the new successor of OnePlus Nord N100 launched back in October 2020. The company had announced the work was going on the Nord N200 a few weeks ago. Now that some of its specifications has already been revealed with a detailed render of the device, we can get can idea on what to expect from the upcoming model. In addition, there is also some additional information on the pricing and availability of the phone.

OnePlus has shared an image of the OnePlus Nord N200 in an interview with PCMag. The image shows the phone details like camera systems, body design and display. In their official blog post, the company has also mentioned that their brand is committed to making the 5G experience more accessible than ever, and the OnePlus Nord N200 5G is a testament to that commitment.

OnePlus Nord N200 will come with a left aligned punch-hole cut out for the front camera and a camera bump for the rear camera. The back also has the branding logo of OnePLus, suggesting the integration of a fingerprint sensor at the side. It has a body dimension of 163.1 x 74.9 x 8.3 mm and weighs 189 grams.

As the CEO of OnePlus also revealed that the Nord N200 will feature a 6.49-inches LCD panel with an FHD+ resolution of 720 x 1600 pixels. The phone will also provide a 90Hz refresh rate which is a highlighting spec for the given price range. It has an aspect ratio of 20:9 and the screen-to-body ratio is 83.2%. The display supports 270 ppi pixel density. Gorilla Glass 3 protects the screen.

The memory configuration will be available on 4GB RAM with 64GB internal storage. It operates on Android 11 with OxygenOS on top.

The rear will have a triple camera setup placed on a rectangular bump module. It features a 13MP primary camera with an aperture of f/2.2, sustained by a 2MP macro sensor with f/2.4 and a 2MP monochrome sensor with an f/2.4.

The front camera will have a 16MP selfie camera with a punch hole housing. Both front and rear camera support video recording at 1080p @30fps.

OnePlus Nord N200 will be launched exclusively in the US and Canada. The starting price of Nord N200 5G will be under 250$ and is expected to release on June 25, 2021. Unfortunately, it won’t be available for the Indian market but another new phone OnePlus Nord CE 5G will soon launch in India with similar specs.