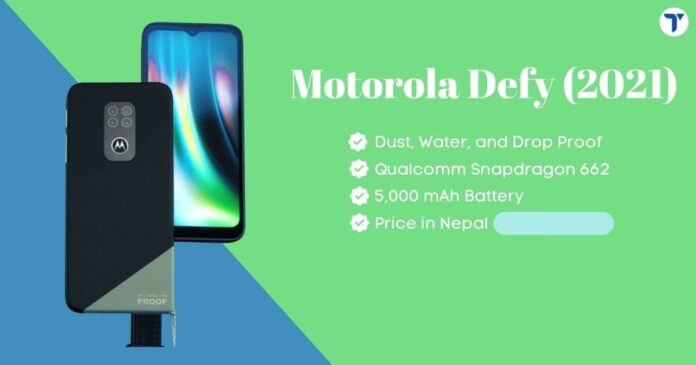 The smartphone has a rugged body and is similar internally to the Moto G9 Play. It is a rugged smartphone like that of the Samsung Galaxy XCover 5.

Motorola Defy (2021) sports a 6.5 inches HD+ screen. It has Corning Gorilla Glass Victus protection. It has a dew-drop notch, housing the selfie camera. The body of the smartphone is a ruggedized plastic body. It is available in two color options: Forged Green and forged Black.

The rear panel has a sleek and textured design, giving the smartphone more grip. It also has a detachable lanyard wrist strap to anchor it to the hand when you need more peace of mind.

In addition, it also has an IP68-certification for water and dust protection; it can be submerged in a depth of 1.5m for 35 minutes.

Similarly, the brand assures that the smartphone can operate at temperatures ranging from -25 °C to +55 °C. And as per the advertisement, the smartphone is drop-proof and can withstand the drop from up to 1.8m heights if it lands on the side or corner frame.

Moreover, the smartphone is designed in a way that it can be cleaned with soap or sanitizer.

Under the hood, it has a Qualcomm Snapdragon 662, built on an 11 nm manufacturing process chipset. Likewise, the chipset has up to 2GHz of clocking speed.

It further combines with 4 GB of RAM and 64 GB of expandable storage. The internal storage is expandable up to 512 GB via a microSD card.

Adreno 610 GPU looks after the graphical processing of the smartphone. Motorola promises the security update for up to 2 years.

The camera around the back is a triple camera setup; it has a 48 MP primary camera followed by two 2 MP shooters for depth and macro camera.

Motorola has used Quad Pixel technology for the perfect shots between sunrise and sunset. The photo resolution of 12 MP is acquired from the primary camera.

The front of the Motorola Defy (2021) features an 8 MP Selfie shooter inside a dew-drop notch.

Both the cameras are capable of capturing videos of 1080p at 30 frames per second.

Fueling the smartphone is a 5,000 mAh battery.

It supports 20W TurboPower charging; it has a USB Type-C port for charging. A single charge can keep up the phone alive for two days.