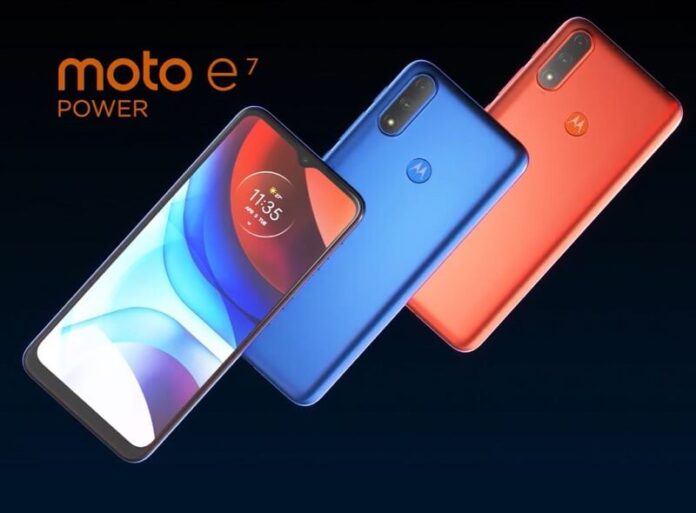 After its hard downfall, Motorola phones are finally back in the market again. Motorola made its comeback in the Nepali market with its two budget-oriented smartphones – Moto G9 Play and Moto E7 Plus. And now, Motorola has introduced another device in its budget E-series of smartphones after unveiling its Moto E6i last week, dubbed as Moto E7 Power.

Motorola launched Moto E7 Power in Nepal at a starting price of NPR 12,999 for the 2/32GB base variant.

Moto E7 Power has a plastic body with an IP52 water repellent design that protects against spills, splashes, or taking a call in the rain. The back panel features a dual-camera setup along with an LED flash inside a pill-shaped camera module. Also, the fingerprint reader is placed within the “batwing” logo on the back. The smartphone comes in two color finishes – Tahiti Blue and Coral Red.

Moto E7 Power equips a 6.5-inch Max Vision display based on IPS technology and has a 60 Hz refresh rate. The widescreen has an HD+ resolution of 1600 x 720 pixels resulting in a 269 PPI pixel density. Furthermore, the display panel has a waterdrop notch housing a selfie snapper, a 20:9 aspect ratio with a large screen-to-body proportion, and Panda Glass protection on top.

Under the hood, the device is powered by MediaTek’s gaming-oriented Helio G25 Soc. It is an Octa-core ARM Cortex-A53 CPU clocked at 2.0 GHz integrated with a 650 MHz IMG GE8320 GPU. Software-side, the device boots on a near-stock version of Android 10 out of the box, meaning you get a clean Android experience.

The phone is available in two memory configurations – one is the base variant with 2GB of RAM and 32GB of internal storage, and the other has 4GB RAM and 64GB internal storage. The storage is expandable up to 1 TB using a microSD card.

The Moto E7 Power’s back panel has a fast-focusing dual-camera setup comprising a 13MP primary sensor with f/2.0 aperture size and phase detection autofocus (PDAF). Accompanying the primary camera is a 2MP Macro Vision lens for close-up shots. Some features you get are Portrait mode, Panorama, Face Beauty, and HDR mode.

Upfront, the waterdrop notch houses a 5MP selfie camera with f/2.2 aperture size and AI face Beautification. Also, Video Recording maxes out at 1080p@30fps from both front and rear cameras. It means you can capture FHD or HD videos at 30fps.

A massive 5000 mAh (JK50) non-removable battery fuels the Moto E7 Power with up to 2 days of battery life. To juice up the battery power, you get a 10W charging support using the Type-C port (USB 2.0). The phone also has a dedicated Google Assistant button on the right-side frame alongside the power button and volume buttons.

Motorola launched Moto E7 Power in Nepal, which is already available for purchase through online or offline stores. Motorola Moto E7 Power’s price in Nepal is NPR 12,999 for the 2/32GB variant. The authorized distributor of Motorola devices in Nepal is Call Mobility.