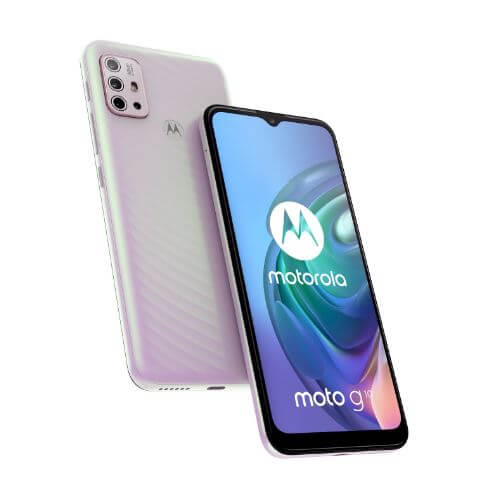 Motorola Moto G10 has 6.5 inches IPS LCD panel of 720p. Following this, the refresh rate of the display is 60Hz. It has a plastic body with a water-repellent design and is IP52 rated for dust and water resistance. Similarly, the phone is available in two color variants: Aurora Grey, Iridescent Pearl. The phone weighs 200 grams.

The power key and the volume rockers lie on the right side of the phone, while a USB Type-C port lies at the bottom for connectivity and charging. It has a 3.5mm headphone jack at the top. Similarly, the selfie is in the water-drop notch at the top-center of the display, while a quad-camera setup at the back is inside a rectangular module. The quad-camera also includes LED flash.

The phone has a fingerprint reader at the back with the Motorola logo. A dedicated Google Assistant button is on the right side.

The smartphone employs Snapdragon 460 chipset pairing with octa-core, clocking up to 1.8 GHz. It further works together with Adreno 610 for graphics handling. Similarly, the memory configuration starts with 4/64 GB going up to 128GB of inbuilt storage. It is expandable up to 512GB via memory card.

Motorola Moto G10 features a quad-camera having a 48 MP primary sensor with an f/1.7 aperture, 8 MP of an ultra-wide sensor with f/2.2 aperture, and 2 MP with f/2.4 aperture, macro, and depth camera each. The camera also has Night Vision mode.

On the front of the device, it has an 8 MP sensor for a selfie.

The smartphone packs a 5,000 mAh battery, which supports 10W charging.

The battery will benefit you all day long. Also, for the budget you spend, such a massive battery is rarely offered by the other brands.

The phone will be available in some selected European countries by the end of the month. The price of the phone for the European country is 150 EUR, as per which the expected price of Motorola Moto G10 in Nepal is NPR 19,000. But, there is no information about the availability of the phone in Nepal.

The authorized distributor of the Motorola device in Nepal is Call Mobility. The phone may be competitive with Realme C15 (NPR 19,990) and Oppo A15 (NPR 18,590), while you can get Redmi 9 power for NPR 18,999 that has a better overall performance.