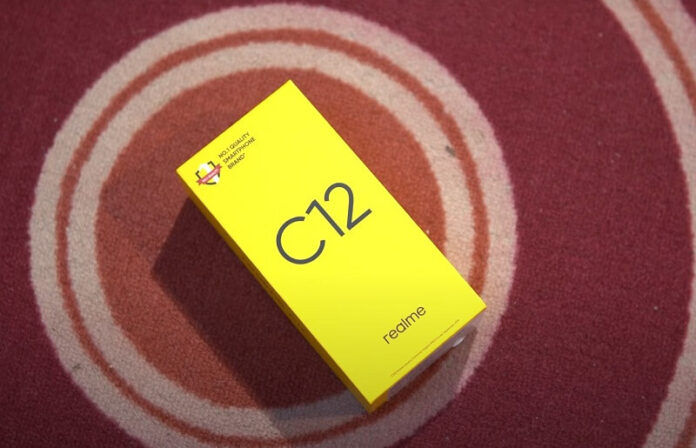 The Chinese company Realme had quite a success in the Nepal market. Realme expanded its market share with its back-to-back phone launch at an attractive price. Adding to its affordable C-series of smartphones, the Realme unveiled two smartphones under the series – Realme C12 and Realme C15 in Nepal in October 2020.

For the smartphones in the budget segment, both Realme C12 and Realme C15 offer pretty decent specifications that are almost the same, except for some differences. You should consider these devices when looking for smartphones under Rs. 20,000 in Nepal.

Note: All these are C12 images.

The Realme C12 and C15 share the same design as both models feature an attractive Geometric Gradient design. Both phones have matte plastic back with plastic frames and a glass front with a mini-drop notch housing a selfie camera. The unique texture does not attract fingerprints and scratches and is comfortable to hold. The phones come with Splash resistant design and ensure sturdiness and durability.

Talking about the display, both devices come with the same 6.5-inch HD+ IPS LCD panel with a waterdrop style min-drop notch and small side bezels. The screen has 720 x 1600 pixels resolution, a 20:9 aspect ratio, an 88.7% screen-to-body ratio, and goes up to 420 nits of max brightness. For protection, Realme has used an unspecified version of Corning Gorilla Glass in both devices.

The Realme C12 sports a 13MP AI Triple Camera setup, while the Realme C15 has a 13MP AI Quad Camera setup in the back. Realme C12 is equipped with a 13MP f/2.2 primary sensor accompanied by a 2MP f/2.4 Black & White portrait lens, 2MP f/2.4 close-up macro lens, and a LED flash inside the squarish camera module.

Likewise, the Realme C15 comes with the same 13MP f/2.2 primary sensor, but the Realme C15 does not have a macro sensor. Instead, it has an additional 8MP f/2.3 ultrawide angle lens with a 119-degree field of view, 2MP f/2.4 retro lens, and the same 2MP f/2.4 Black & White portrait lens. These four cameras are packed inside the square-shaped camera module and a LED flash below the square box.

Both devices are powered from the MediaTek Helio G35 SoC, which is the same entry-level chip that was used in its previous Realme C11. It is an octa-core processor (12nm) based on Cortex-A53 architecture and clocks speed up to 2.3GHz. This optimized gaming processor is complemented with PowerVR GE8320 GPU.

The main highlight of both the Realme C12 and C15 is their massive 6000mAH high-capacity battery that provides up to 57 days standby as per the company claims. The Realme C12 supports 10W charging, which takes a lot of time to juice up. Whereas, the Realme C15 supports 18W fast charging. Both devices support Reverse Charging and come with Super Power Saving mode. However, they use a micro-USB connector for charging.

Realme C12 and Realme C15 Price in Nepal and Availability

The Realme C12 and Realme C15 have been launched in Nepal and are officially available starting from the 18th of October, 2020. The price for Realme C12 for the 3GB / 32GB variant is Rs. 14,990 and the Realme C15 for 4GB / 64GB variant is priced at Rs. 18,590. Both devices come in two color options – Power Blue and Power Silver and are available in all official Realme stores as well as in online stores like Daraz and Sastodeal.