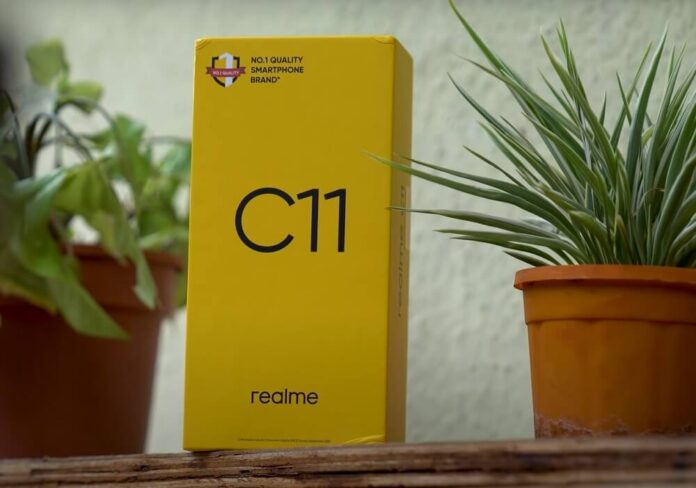 Realme has introduced another entry-level budget phone called Realme C11 in Nepal. Rising prices of smartphones for many reasons have forced smartphone makers to focus on the ultra-budget price segment where the competition is fierce. The Realme C11 official price in Nepal is Rs. 14,990. Let’s see if this device gives you a good deal.

The Realme C11 powered by the MediaTek Helio G35 SoC is technically a successor to the Realme C3. Being one of the contenders for the best smartphones under Rs. 15000 in Nepal, the device offers robust design, build quality, and is a battery beast.

In the budget segment, Realme phones have never disappointed in the design area. Likewise, the Realme C11 is a good-looking phone. It has a plastic body with a subtle texture of wavy lines in the back. The Realme C11 does stand out in a crowd, but at the same time, it’s very familiar especially for existing Realme users.

The back of Realme C11 comes with a dual-camera setup placed inside the square with an LED flash. The textured rear panel comes with 450 curves engraved in a 0.1mm parallel arrangement so it does not attract fingerprint marks. Also, there is the Realme branding along with the camera.

Upfront, you get a 6.52” display with a mini-notch housing a selfie camera.

The Realme C11 features a 6.5” (16.5cm) IPS LCD HD+ display with a resolution of 1600 × 720 pixels. With a 20:9 aspect ratio and 81.7% screen-to-body ratio along with Gorilla Glass 3 protection on top, the display is quite good for the budget. The device does not have a fingerprint sensor but comes with face recognition.

Realme C11 can record videos at 1080P@30fps, and 720P@30fps in both the front and rear. Considering the price range we’re looking at, the smartphone performs well in the camera department.

The processing power of Realme C11 comes from the MediaTek Helio G35 processor with IMG PowerVR GE8320 GPU. It is an octa-core CPU based at 12nm technology and clocked at 2.3GHz with the main focus on gaming at the budget segment. The performance is backed with 2GB LPDDR4x RAM and 32GB internal storage that expands up to 256GB with a dedicated MicroSD card slot.

Coming to the software, the Realme C11 runs the Android 10 operating system topped with the company’s layer of Realme UI.

Just like the design, the battery is also one of the highlights of the Realme C11. The performance of this device is backed by a massive 5000mAh battery with a 10W Charger supplied by the company. Although it does not have fast charging, it offers good battery life with 40-day standby as per company claims.

Realme C11 is priced at Rs.14,990 in Nepal and was made available starting from the 18th of August 2020 all over the nation in Official Realme stores. It’s available in two different color variants: Rich Green and Rich Grey.

OnePlus 7 launched in Nepal with competitive pricing: A Flagship killer?