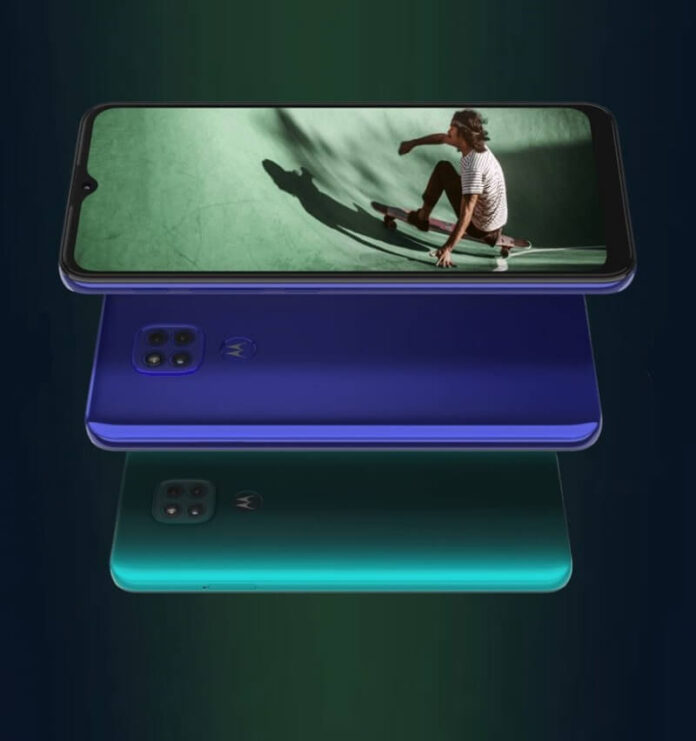 Motorola finally makes a comeback in Nepal’s smartphone market with the launch of two phones – Moto G9 Play and Moto E7 Plus during the Daraz 12.12 sale. Motorola Moto G9 Play’s official price in Nepal is NPR 19,990 for the 4GB/128GB variant.

Priced just under NPR 20,000, the device is a budget-friendly offering from the brand making it a good competition among the best phones under 20,000. Let’s check out its features, specifications, price in Nepal, and availability.

Moto G9 Play has a plastic body with a water repellent coating to protect against accidental water splashes. The rear panel features a triple camera system with a LED flash inside a square-shaped camera module. Just below the module, there is the Motorola logo that also acts as a fingerprint scanner.

In the front, Moto G9 Play equips a 6.5-inch Max Vision display with a waterdrop style notch on the top housing a selfie camera. The ultrawide screen uses IPS TFT LCD technology and has an HD+ resolution of 1600 x 720 pixels. The display features a 20:9 aspect ratio for maximum viewing experience and a larger screen-to-body ratio of 87%.

Moto G9 Play performance is powered by an 11 nm process-based Qualcomm SM6115 Snapdragon 662 Soc. It is an octa-core Kryo 260 CPU clocked at 2.0 GHz, integrated with Adreno 610 GPU clocked at 950 MHz. Moreover, adding to the super-responsive AI performance is 4GB RAM and 64GB/128GB of built-in internal storage. Furthermore, the storage is expandable up to 512GB using a microSD card slot.


Motorola Moto G9 Play operates on Android 10 OS out of the box. One main advantage with Motorola phones is they run on stock Android that gives you a clean, ad-free Android experience.

Upfront, an 8MP f/2.2 sensor resides inside the waterdrop notch for selfies. The front camera also records videos at 1080p@30fps.

An integrated 5000 mAh battery fuels the device that lasts up to 2 days as per the company claims. Moto G9 Play supports 15W fast charging via a USB Type-C port. The device ships with a 20W TurboPower Charging adapter inside the box. For security, Motorola has included a fingerprint scanner and Face Unlock. The phone also supports the NFC feature and has a hybrid dual SIM slot.

Motorola launched Moto G9 Play with a 4GB/128GB memory configuration at a price of NPR 19,990 in Nepal. The phone is available in only Sapphire Blue color finish, and you can buy it exclusively on Daraz.

Motorola Moto G9 Play is definitely a contender for the list of best smartphones under Rs. 20,000. It gives a tough competition to Xiaomi Redmi 9 Prime, Poco M2, Realme C15, OPPO A15, etc.