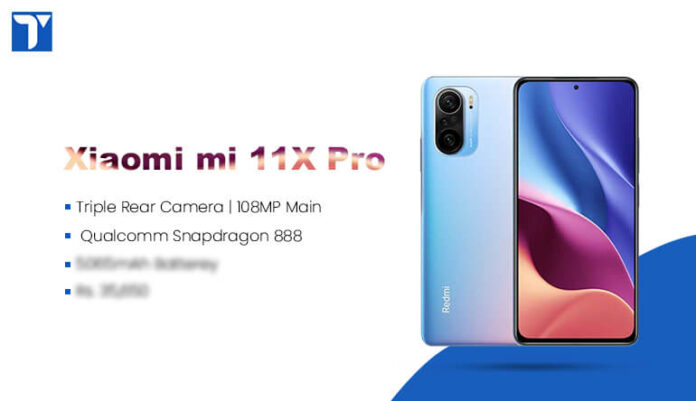 Xiaomi Mi 11X Pro has an excellent AMOLED display with excellent performance. The image and the video quality from the main camera are also commendable. It also supports fast charging.

Xiaomi Mi 11X Pro is similar in design and builds quality to the Xiaomi Mi 11X. It has a 6.67 inches Super AMOLED screen with a 120Hz refresh rate. It also supports HDR10+. The smartphone has a glossy back with Gorilla Glass 5 protection on both the front and the back panel.

A selfie camera is in the small notch at the front. The camera module on the rear has curved corners. A white circular ring surrounds the main camera.

The fingerprint sensor in the Xiaomi Mi 11X Pro is embedded in the power button.

Xiaomi Mi 11X Pro has excellent performance as it is powered by the Snapdragon 888. It has a 5nm fabrication process. Similarly, the octa-core has a clocking speed of up to 2.84 GHz. Further, it has the Adreno 660 GPU.

The memory configuration option of the smartphone includes 8 GB of RAM combined with either 128 GB or 256 GB of internal storage.

The smartphone runs on MIUI 12 based on the Android 11 out of the box.

A triple camera setup on the back flaunts a primary camera of 108 MP, an ultra-wide-angle sensor of 8 MP, and a 5 MP macro camera. The main camera has an aperture of f/1.8 and is a Samsung ISOCELL HM2 sensor, whereas the ultra-wide angle camera has f/2.2.

While the rear camera setup is different from the Xiaomi Mi 11X, the front camera is the same 20 MP sensor with an aperture of f/2.5.

As per the advertisement, it takes 52 minutes to charge the battery from 0% to 100%.

You can purchase the smartphone from the authorized retail stores of Xiaomi. The authorized distributors of the Xiaomi devices in Nepal are Vatsal Impex Pvt. Ltd and Teletalk Pvt. Ltd.

The Xiaomi Mi 11X Pro competitor can be a member from the same family, i.e., Xiaomi Mi 11X. As long as you are not much concerned about the camera, you can go for the Mi 11X without any doubts.