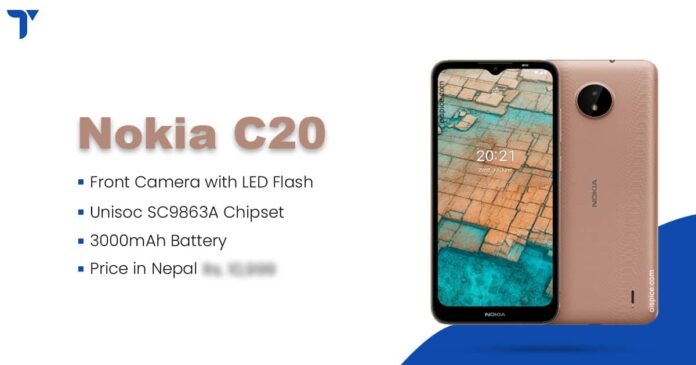 Nokia has launched a budget-offering smartphone Nokia C20 as a new addition to its C lineup. Nokia phones don’t come with much high end specs and features like other latest brands; however, they are still in demand among Nokia fans due to the impressive durability the phones offer. In this article, you will find about the specifications of the Nokia C20 and its price in Nepal.

As an entry-level phone, Nokia C20 follows an average specs sheet. It features a 5MP camera system but with a trendy setup. The Unisoc processor isn’t suitable for progressive performance, whereas the battery backup is relatively low. Other specs like display and build quality are considerable for the given price range of NRs. 10,999.

Nokia C20 comes with a polycarbonate body with a 169.9 x 77.9 x 8.8mm dimension and weighs 191 grams. The front has visible bezels running around the screen and encloses the Nokia branding on the bottom chin. Also, the back has a circular camera module and a speaker grille.

Nokia C20 is powered by Unisoc SC9863A which is a normal performing chipset. It is based on a 28nm Octa-core processor with 4×1.6GHz Cortex-A55 cores and 4×1.2GHz Cortex-A55 cores. The graphics unit consists of Mali-G52 MC2. This level of processing unit doesn’t allow you to run heavily loaded apps.

It is available in a single memory configuration with 2GB RAM and 32GB internal storage. If more storage is required, you can expand the memory using a microSD card via a dedicated slot. The device operates on the Go-edition of Android 11 which is a near-stock software that avoids unnecessary ads, notifications, and bloatware.

The phone has a single camera system at both the front and back. A circular module at the back holds the rear camera with a 5MP lens and an LED flash.

The front also has a 5MP selfie camera placed in a water-drop notch. An LED flash is attached on the front bezel for lighting.

It carries a 3000mAh battery which provides a couple hours of back up in regular usage. The back cover is removable that allows you to replace the battery in case of damage.

Nokia C20 cost NPR. 10,999 for the 3GB + 32GB variant and is available for sale in all authorized online and offline stores across the country.