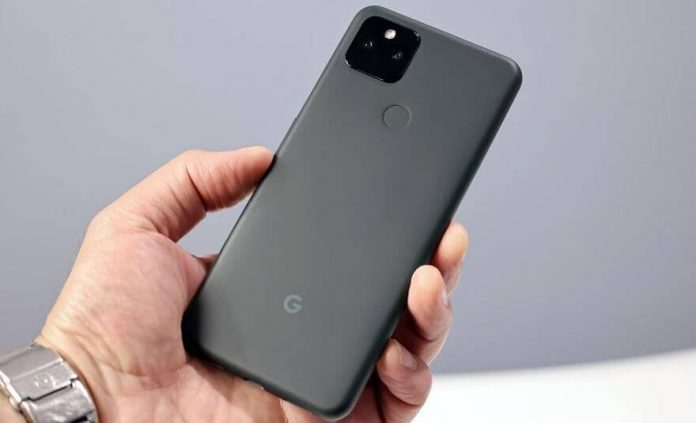 Google Pixel 5a 5G sports a 6.34-inches OLED display; it is an “Always-on” display. The smartphone supports HDR content and has a 1080 x 2400 pixels resolution. Likewise, Google claims the smartphone to have up to 800 nits of peak brightness.

The thin bezels surround the display of the smartphone and have a punch hole Selfie camera. On the rear side, it houses a dual camera in a square module. At the bottom of the rear panel, it has the branding of Google as “G.”

It has IP67 certification to resist dust and water (up to one-meter depth for 30 minutes). Also, the Gorilla Glass 3 protects the display of the smartphone.  Similarly, the smartphone is available in Mostly Black color, which looks like iPhone 11 Pro in Midnight Green color, and weighs 183 grams.

The smartphone also has a rear-mounted fingerprint reader for biometric authentication.

Furthermore, the processor combines with 6GB RAM and 128 GB storage. Additionally, for the graphic handling, it employs Adreno 620.

Google Pixel 5a 5G boots on Android 11 out of the box.

The camera system is the same as Google Pixel 5. A dual rear camera is available in the Google Pixel 5a 5G. They are a primary lens of 12.2 MP with a lens aperture of 1.7 and an ultra-wide camera of 16 MP with an aperture of f/2.2. The ultra-wide camera possesses a 119-degree field of view, while the main camera supports Optical Image Stabilization (OIS) and Electronic Image Stabilization (EIS).

The smartphone draws its power from the Li-Po 4,680mAh, non-removable battery. The battery supports 18W fast charging technology. Similarly, it also supports USB Power Delivery 2.0. As per Google, the battery lasts for up to two days on a single charge.

You can also use Extreme Battery Saver to save your battery. On the other hand, the Adaptive Battery lets you limit the power to the app you rarely use.

Google Pixel 5a 5G Expected Price in Nepal and Availability

Poco X3 NFC gets a Price cut in Nepal after the...

Asus Zenfone 8 Unveiled as the New Flagship Smartphone from the...