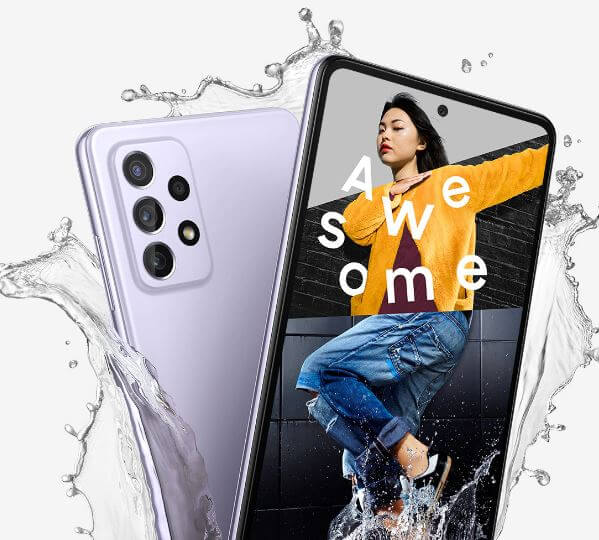 Samsung Galaxy A 72 is the mid-range device from Samsung under the Galaxy A series. The phone had been subject to various leaks and rumors about its features and launch date. But Samsung has finally launched the smartphone along with Samsung Galaxy A52 on 17th March. The Samsung Galaxy A72 is available for purchase in Nepal at the starting price of NPR 51,999 for 6/128 GB.

Samsung Galaxy A72 comes as a successor to the Samsung Galaxy A71. Unlike its predecessor, it has only a 4G variant as of now. As for the 5G version of the device, it is still in the dark.

Samsung has moved on from the diamond cut design and has opted for the pastel color design for this generation of Galaxy A series devices. The device has an IP67 rating for dust and water resistance. The back panel has a matte finish.

In terms of the display, the device offers a 6.7 inch super AMOLED display panel with an FHD+ resolution of 2400 x 1080 pixels in a tall aspect ratio of 20:9. The display features a center punch-hole cutout to house the front-facing camera and has a refresh rate of 90 Hz.

The phone’s right side has a power button and a volume rocker, while the left side is neat and clean. The secondary mic and hybrid SIM tray lie on the top, whereas the bottom houses a headphone jack, USB Type-C port, primary microphone, and speaker grille.

As for the software of the device, it runs on OneUI 3.1 based on Android 11 out of the box. Samsung promises three years of software updates and four years of security updates.

Upfront, the selfie camera is a 32 MP sensor with an f/2.2 aperture housed inside the punch-hole cutout. The rear camera features gyro EIS and can take up to 4K videos at 30 fps.

Samsung Galaxy A72 packs a 5000 mAh battery with support for 25W fast charging technology through a USB Type C port.

Samsung Galaxy A72 Price in Nepal and Availability

The price of the Samsung Galaxy A72 in Nepal is NPR 51,999 for the base variant of 6/128 GB and NPR 56,999 for the 8/256 GB variant. The official national distributors of Samsung’s gadgets for Nepal are Him Electronics and Integrated Mobility Solutions (IMS). You can get the smartphone via online stores or offline stores nearby.