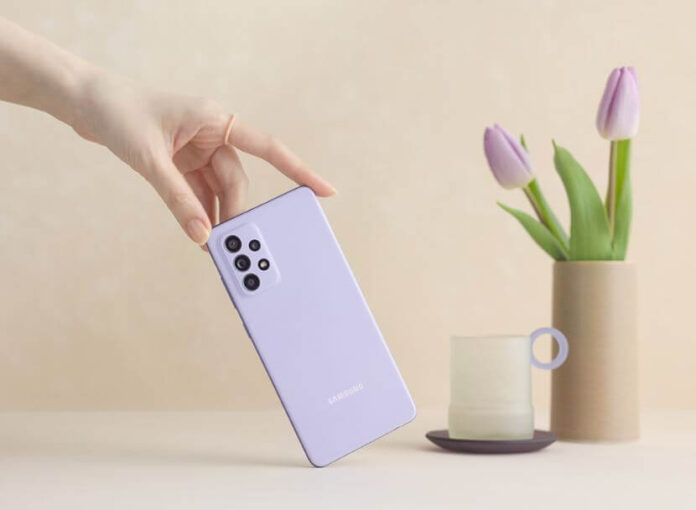 The smartphone is a successor to the Samsung Galaxy A51, and like its predecessor, it also comes in 4G and 5G variants. The two versions are similar and differ only in terms of the chipsets, refresh rate, and RAM options.

Both the 4G and the 5G variants of the device are identical in terms of the phone’s design aspect—both of these features a plastic back panel and metal side frames. The back panel features a camera bump to house the rear camera setup, which is of the same color as the panel itself, unlike its predecessor. The device comes with IP67 certification for water resistivity.

It offers a 6.5-inch Super AMOLED display with an FHD+ resolution of 1080 x 2400 pixels, with an aspect ratio of 20:9. The display is an infinity-O display with a center punch-hole cutout to house the selfie camera. The display has a refresh rate of 90 Hz, and a peak brightness of 800 nits.

The smartphone is available in a 6 GB RAM configuration with 128 GB of internal storage and 8 GB RAM coupled with 256 GB of internal storage. However, the 8/256 GB variant will only be available in limited regions. The 4G version also has a 4 GB RAM option. Similarly, the smartphone comes with an option to extend the device’s storage with support for an external SD card for up to 1TB.

A 4500 mAh battery backs up the device. It also supports 25W fast charging technology via a USB Type C port. However, the device will ship with a 15W fast charger.

According to Samsung’s claim, Samsung Galaxy A52 has two days of battery life.

Samsung Galaxy A52 4G Price in Nepal and Availability

ZTE Blade A71 is Launching Soon in Nepal, Along with ZTE...