Samsung Galaxy A51 launched in Nepal: A budget-friendly smartphone 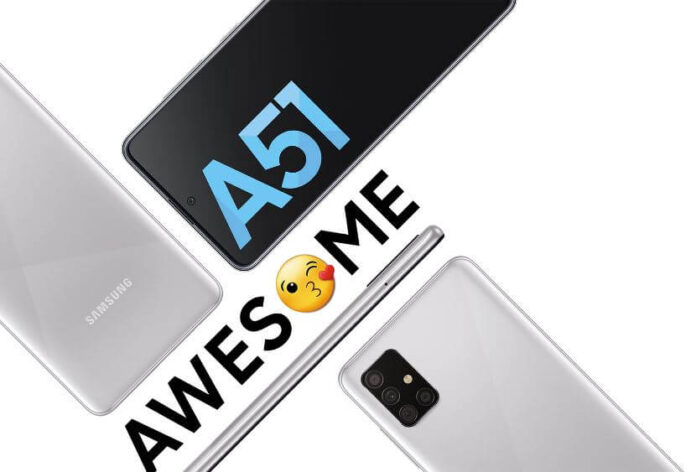 The new generation Samsung Galaxy A51 comes with similar features to the A series of the previous generations. The phone comes with 6.5 inches of Super AMOLED display, giving you the smoothest screen experience.

The Samsung Galaxy A51 outstands the smartphones in the M series on to the design as it comes with a mirror back and a vibrant diamond cutout design. The slim design of this phone feels premium on the hand. Similar to A71, Galaxy A51 has a hole-punch front camera at the front panel of the display. Likewise, the phone is made up of plastic material, a blend of glass and plastic.

On the display side, Samsung Galaxy A51 comes with a 6.5 inches Super AMOLED display with an aspect ratio of 20:9. The phone has a resolution of 1080 x 2400 pixels and is protected by Corning Gorilla Glass 3.

Samsung Galaxy A51 has the same old Exynos 9611 chipset as its predecessors like Samsung Galaxy A50. It would rather be convenient if Samsung had used the Snapdragon 730 under Galaxy A51’s hood. Although, with basic day-to-day tasks, the Galaxy A51 runs very smoothly but lags with heavy intensive use of Graphical content. The phone comes with a Mali-G72 GPU to handle the graphics.

There is only a single variant of Galaxy A51 in terms of memory. The smartphone has a storage combination of 6GB of RAM and 128 GB of storage. However, if the storage isn’t enough, it has the feature of expanding its storage via an external microSD card.

Compared to last year’s model, which had only a triple camera setup, this time, Samsung has come out of their comfort zone and has added a macro lens to the back panel.

With a quad-camera setup arranged in L-shaped, Samsung Galaxy A51 comes with a 48MP of primary shooter, 12 MP of a wide-angle lens, 5MP macro camera, and 5MP depth sensor. The 12MP wide-angle lens lets you take a 123-degree field-of-view.

Although the primary and wide-angle lens takes a pretty sharped image, the macro and depth lenses are of limited capabilities as they are mostly dependent upon good lighting.

On the front of the smartphone, there is a 32MP lens for the selfie. It comes in handy when you want to take a group selfie photo.

A 4000mAh non-removable battery backs Samsung Galaxy A51. The phone lasts up to a day on casual usage, whereas it gives backup up to 17 hours for moderate to heavy use.

Samsung Galaxy A51 Price in Nepal and Availability

Samsung has given a discount on Galaxy A51. So the price of the Samsung Galaxy A51 in Nepal is Rs.39,999 for 6GB RAM and 128GB storage. The phone can be purchased through any of the retail shops all over Nepal.