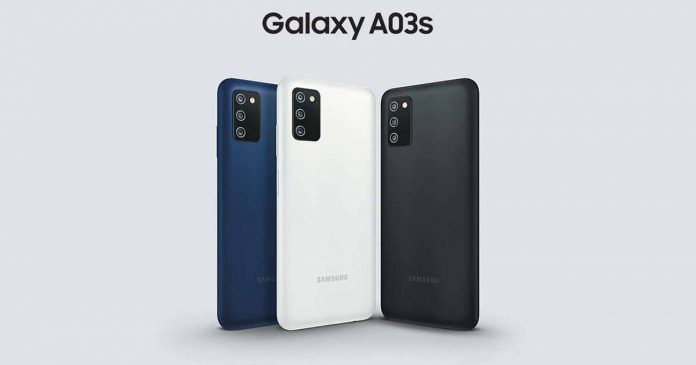 Samsung Galaxy A03s is a budget-friendly smartphone with interesting features at an affordable price. The build quality and performance levels are satisfying as per the given price. It has a large battery and impressive other features.

Samsung Galaxy A03s features a rear triple-camera in a rectangular module, while the camera stands in a vertical column, the LED flash sits alone in the next column. It has a polycarbonate body and an Infinity-V notch display housing the front camera. Likewise, the smartphone has three color options of Black, Blue, and White. It weighs 196 grams.

Samsung Galaxy A03s flaunts a 6.5-inches PLS LCD. It flaunts a display with a resolution of 720 x 1600 pixels and an aspect ratio of 20:9. The display possesses thin bezels around and thick bezels on the chin. A side-mounted fingerprint sensor is available for biometric authentication.

Powering the smartphone is an Helio P35 chipset that is built on a 12 nm manufacturing process. The octa-core processor has a 4 Cortex-A53 clocking at 2.35 GHz, and a four Cortex-A53 has a clocking speed of 1.8 GHz. For graphics handling, the smartphone employs PowerVR GE8320.

The processor combines with either 3 GB RAM and 32 GB storage or 4 GB RAM and 64 GB storage. The consumers also have the option of expanding the storage via a microSDXC card. Samsung Galaxy A03s runs on Android 11 based on One UI 3.1 Core, out of the box.

Samsung Galaxy A03s offers a triple camera on the rear panel. The first rear camera is a 13 MP primary camera with a lens aperture of f/1.8. And the other cameras are 2 MP macro and depth cameras; both have an aperture of f/2.4. For the footage, the rear camera can capture it in 1080p at 30fps.

Also Read: Samsung Galaxy Z Fold 3 is Official as a Third-Generation of Foldable Smartphones from Samsung

Samsung Galaxy A03s packs a 5,000 mAh battery. It supports 15W charging. A fully charged battery can keep the smartphone up all day long. Similarly, the battery charges via a USB Type-C port.

Also Read: Samsung Galaxy F22 is Official in Nepal with a Massive Battery of 6,000 mAh

In India, Samsung sells Samsung Galaxy A03s at INR 11,499 for the 3/32 GB variant and INR 12,499 for the 4/64 GB variant. Hence, we expect the price of the Samsung Galaxy A03s in Nepal to be around NPR 18,500 for the base model of 3/32 GB and NPR 20,500 for the 4/64 GB model. Him Electronics Pvt. Ltd. and Integrated Mobility Solutions (IMS) are the official distributors of the Samsung phones in Nepal. You may purchase the smartphone from the partner retail stores, either online or offline.

You may also check out other smartphones in a similar price range like Samsung Galaxy M12, Poco M2, Redmi 9 Power, Coolpad Cool 6, etc.

Symphony Nepal Launches Symphony Z32 in Nepal Along with other Smartphones