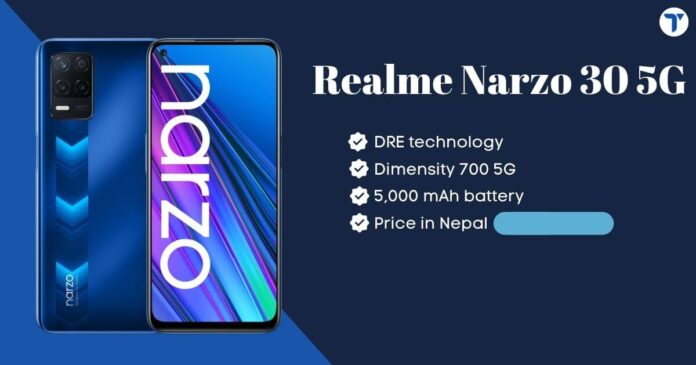 With the launch of Realme Narzo 30 5G, the Narzo 30 Series of Realme has become a huge family. The newest addition in the series could be the cheapest 5G smartphone in Nepal if it launches here.

Realme Narzo 30 has a sleek and light design. It is specially designed for the narzo players. It has an FHD+ display. The refresh rate of the smartphone is 90Hz, whereas the touch sampling rate is 180Hz.

Likewise, the display has a resolution of 2400 x 1080 and a peak brightness of 600 nits. The feel of the smartphone is exactly like Realme 8 5G.

It has an extraordinary design effect via advanced craftsmanship, with a light pattern. It further combines speed and spatial perception presented in two colors. The smartphone weighs 185 grams. It is available in two color variants: Racing Silver and Racing Blue.

It has a side-mounted fingerprint sensor for biometrics.

Powering the smartphone is the Dimensity 700 5G Processor; it is built on 7 nm processing technology. The CPU clocks up to 2.2GHz, while the GPU clocks up to 950MHz.

Realme Narzo 30 5G supports 5G + 5G dual standby and is compatible with the world’s mainstream 5G bands and SA/NSA network. The Smart 5G results in a 30% reduction in power consumption.

Under the hood, the smartphone runs on realme UI 2.0 based on Android 11.

Fueling the smartphone is a 5000 mAh battery. It supports 18W Type-C quick charging. In addition, the battery supports 655 hours of standby time, 114 hours of music, 16 hours of videos, and 42 hours of calling.

Super Power Saving Mode of the battery lets you carry on for long hours of entertainment even at a 5% battery level.

The authorized distributor of Realme devices in Nepal is Pashupati Tradeline Pvt. Ltd. Meanwhile, you can check out other Realme smartphones available in Nepal, such as Realme C11, Realme C15, Realme 7, Realme 8, etc.