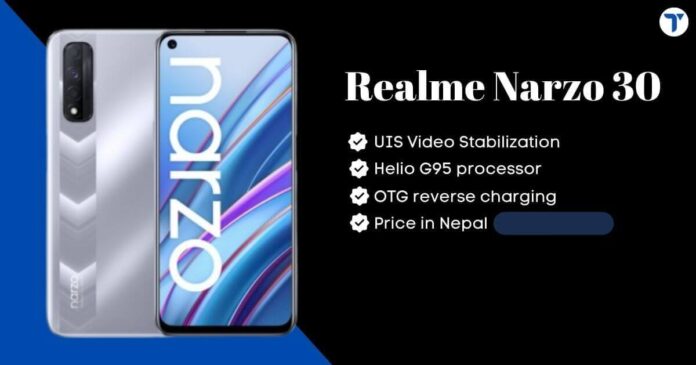 Realme Narzo is a budget-friendly smartphone, especially for gamers. It has huge storage and battery capacity; the smartphone packs an amazing camera setup. Let’s have a closer look at what the smartphone offers.

Realme Narzo 30 features a refresh rate of 90Hz and a resolution of 1080p. It has a screen-to-body ratio of 90.5%. The display of the smartphone is a 6.5-inches FullHD+. Similarly, the display has a punch hole selfie on the top-left corner. A peak brightness of 580 nits is achievable during sunlight mode.

Realme Narzo 30 has a racetrack-inspired chevron stripe on the rear. It houses a triple camera in a rectangular module with curved corners; the camera sits in a vertical line along with an LED flash. It is available in two color options: Racing Blue and Racing Silver.

The smartphone has a side-mounted fingerprint sensor for unlocking the phone.

Powering the smartphone is the Helio G95 processor. It has a frequency of 2.05GHz and combines with a powerful Mali-G76 GPU, made just for gamers.

Realme Narzo 30 has an inbuilt storage of 128 GB, which can fit more than 28,000 photos or 450 TV episodes. A 6 GB of RAM combines with internal storage. It has a dedicated microSD card slot for storage expansion.

Likewise, Realme Narzo 30 also supports OTG reverse charging; you can use the phone to charge your other smart devices.

The authorized distributor of Realme smartphones in Nepal is Pashupati Tradeline Pvt. Ltd.

Redmi Note 9 gets a Price Cut in Nepal as Note...