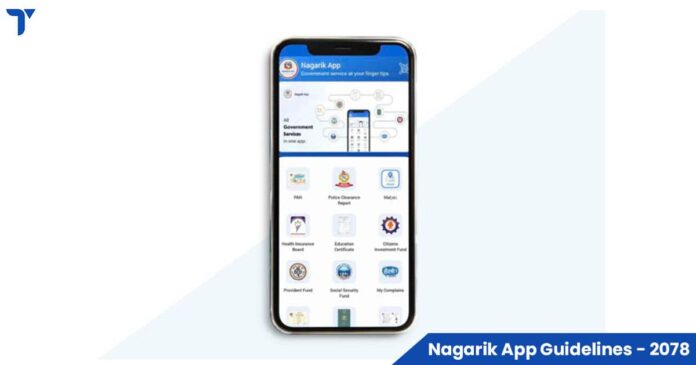 Nagarik app is an all in one service portal developed to provide almost every governmental services to citizens, through a single digital platform. Nepal government has recently issued new guidelines regarding the app registration and service delivery. The app has already received great acceptance from the public. Such growing popularity of Nagarik app is a sign of the “Sarkari Sewa haat haata ma” motto coming true.

At the initial stage, the Nagarik app has integrated partial government units. The administration has announced to add more services in upcoming updates. Currently, following departments are available for users to access governmental services:

The office of the Prime Minister and Council of Ministers published the Nagarik app Operation and Management Guidelines – 2078 on Asadh 15. It is an update to the previous Nagarik Mobile App Operations Guidelines- 2076 which is no more valid. The major changes include updates concerning the services provided through Nagarik app, the responsibilities of related authorities in operations and management, and some user guidelines for the public as well.

Citizens can register as Nagarik app users by following the given steps:

There are also some new guidelines for the service providers who deliver their services via Nagarik App. The service providers should be able to make their online services available in Nagarik app for 24 hours for the users; governmental units are most likely to abide by this rule. Moreover, telecom companies should issue SIM cards only to the users who use their own name for SIM registration.

The app was developed under the collaboration of Prime Minister’s IT Consultant with the Communications, Information and Technology, Nepal Information Technology Centre, Office of Ministers and Council of Ministers. Hence all departments have their own roles and responsibilities in maintaining a progressive operation and management of the app.

The Ministry of Communications, Information and Technology is the prime authority to handle operations, data management, technical maintenance and data security. Likewise, the Office of Prime Minister is accountable to act as a facilitator in the operations of Nagarik App, securing the users privacy by coordinating the assigned ministries and departments.

As per the guidelines, an action plan for Nagarik App would be prepared and presented to the PM’s office in every four months. There is also a rule for conducting technical audit of the system of Nagarik App in every 6 months to ensure data security.

Embossed Number Plate Mandatory for All Types Of Vehicles In Nepal...