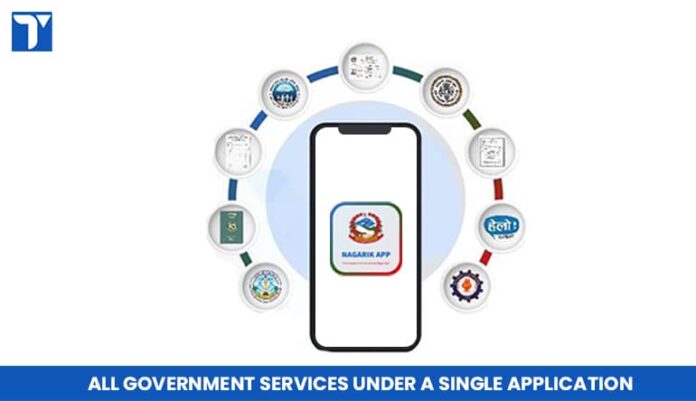 Nagarik app, an innovative approach of the Nepal government to digitize almost every government services through a single system, has been finally released with its fully comprehensive version. On the occasion of the fourth National ICT Day, Prime Minister KP Sharma Oli unveiled the full version of the Nagarik App. Its beta version was released a few months ago for public trial and gained instant popularity among Nepali citizens.

With the vision of e-governance in Nepal, the Nepal government came up with a digital solution and developed a comprised system for its citizens, ‘Nagarik App’. The app was officially published on January 15, 2021, for the beta test, which was remarkably successful to hook the public’s attention with its available services. It collected over 500k downloads with 1,91,000+ registrations, 3000+ Police Clearance Report and 10,000+ PAN issued.

During the beta test, users reported some system failures like SIM verification and Citizenship issuing. Many suggested other necessary services be featured in the app. We hope that the Nepal government has addressed its citizens’ demand in the new update of the Nagarik app.

Following are the newly added features:

Prime Minister Oli live demonstrated this feature by virtually opening a bank account through the Nagarik app. This feature allows citizens to avoid physical visits to the bank or fill up forms and submit identification for verification.

Users can now create a new bank account from anywhere simply by filling up the necessary documents online. However, people who tried this service are receiving messages to visit the bank for verification which is said to be a default reminder from the bank’s automated system.

The service is initially available only for Nepal Bank, Nepal Banijya Bank, and Sidhartha Bank but the government will gradually add more banks sooner.

Another notable feature in the full version of the app is QR code integration. This feature will provide quick access to users for services like instant KYC verification, instant form fill-ups of different government services, and even log into the Nagarik app without OTP verification.

The QR feature can be a major factor to boost users’ experience in the app by facilitating them with several useful functionalities on a single scan. It can also be used for citizenship validation.

Citizens can now pay the vehicle taxes and renewal fees right through the app. In coordination with many Transport Management Offices around the country, the Nepal government aims to make vehicle office services hurdle-free for its citizens.

It is obligatory for vehicle owners to pay third-party insurance, but the most time-consuming queue and stressful paper works have always been a huge inconvenience for Nepali citizens. So this long waited service will be a great relief for vehicle owners.

Nagarik app consists of all kinds of documents related to the citizens. It allows landowners to view their land ownership documents and online map. They can also pay their land revenue online using the app.

The government will be incorporating the Department of Land Management, Survey Department, and Inland Revenue Offices into the Nagarik App system so that users can easily access various land and property-related services.

The app has made it simple for the public to clear local government taxes. They can pay any government tax through the app within few clicks. This can help people save their time and effort while accessing services from the local administrations.

With wide acceptance and praise from the public, Nagarik App is a remarkable milestone for Digital Nepal Framework. It will open many revolutionary doorways for both government and citizens to make public service convenient.

Since the app will be online operated and people use online channels to connect, there will be challenges of cyber theft and infiltration. The government will have to ensure users’ data security and keep them from being vulnerable to exploitations.

The Nepal government still has many features and services to offer its people employing a digital platform. The inclusive nature of this app makes it possible to integrate all sorts of services into its ecosystem. We can always expect more in its upcoming updates.

How To Get International Payment Dollar Prepaid Card in Nepal?