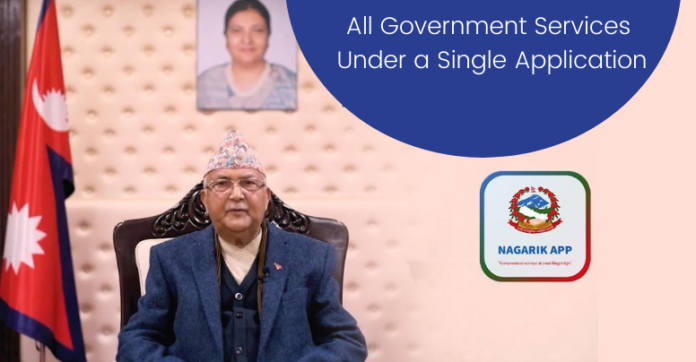 Recently, NRB committed to launching an international payment system in Nepal to initiate the Digital Nepal campaign. Now, Intending to provide government services in an easy way to its citizens, working for three years, the Nepal government officially released the Beta version of its “Nagarik App” on 15th January 2021.

The app’s trial version was unveiled by Minister for Communication and Information Mr. Parbat Gurung, in a press meet organized at Singha durbar.

Mr. Gurung said, “Though people can download the app now, the beta version will run for some months to make it more secure, organized, and complete, and we are aiming to integrate the other government services soon.”

According to the Minister, the project is one under the Digital Nepal Framework.

How will the App benefit citizens?

Later, Honorable Prime Minister Mr. KP Sharma Oli, through a video message, appealed to the citizens to use the Nagarik App and take its advantages while also urging them to give suggestions to make necessary improvements. He firmly believes the app will save citizens’ time and bring transparency between the people and the government. Further, he added that the app would also play a vital role in ending the corruption.

How to use Nagarik App?

You have now successfully registered yourself in the Nagarik App. You can further use the app’s services by entering the Pin code.

Since the app runs on its beta version, only a few services are available at the moment. However, more services will be available in a few months, as per Minister Gurung.

The nine available services in Nagarik App are:

The services are available 24 hours and even on public holidays.

Other services like transportation tax payment, driving license application, passport, and many more will be available soon in the app. As the MoCIT has planned to integrate all the other government bodies’ app into a single Nagarik App.

According to the Joint Secretary of MoCIT, Mr. Anil Kumar Dutta, the app is fully secured. It has its primary data center at Government Integrated Data Center, located in Singha Durbar. Another backup for the disaster recovery system is the Disaster Recovery Center located in Hetauda.

How to be secured while using Nagarik App?

The app has two-factor authentication with OTP, i.e., the One Time Password system.

From the user side, to keep the data safe following things can be done:

The app’s concept is appreciable as Nepal’s government services are quite a hassle to take at a time. But, citizens have also doubted their data privacy while using the app. However, the effort to digitize the Nepal government’s services is commendable.

Micromax IN 2B and IN 2C Specs Spotted on Geekbench: Unisoc...