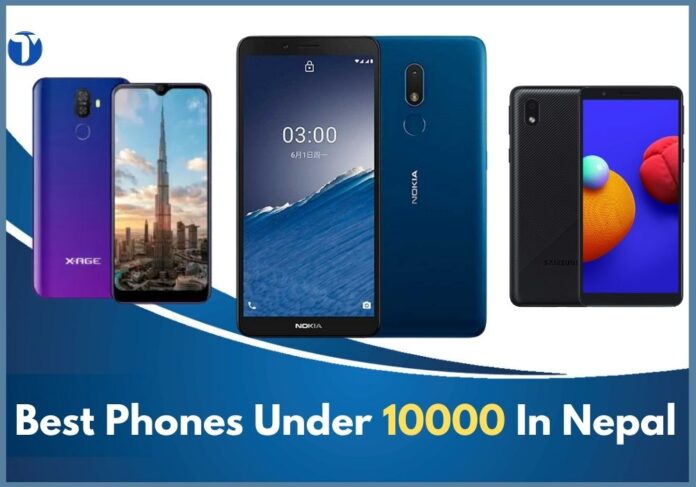 Nowadays, Smartphones have been a significant part of our lives. Without it, our daily activities seem incomplete. The demand for the smartphone has been increasing day by day. With the increasing consumption of smartphones, the manufacturers’ competition has risen. Likewise, with the growing competition, the phones are getting much cheaper, having decent specifications.

There are various decent smartphones we can find, according to our needs and budget. Even if you do not have the high budget to purchase premium phones, you need not have to worry as there are numerous affordable smartphones from which you can choose from.  In this post, we’ll talk about the best smartphones under 10,000 in Nepal available right now.

Lists of Best Smartphones Under 10,000 in Nepal

X-Age G2 is a very new brand in the Nepalese market. It comes with a huge 6-inch display having an HD panel. With this large panel, the users can enjoy a beautiful screen experience. There is a water-drop notch housing the 8MP front camera at the front. Similarly, a dual-sensor at the back comprises a 13MP primary camera accompanied by a 0.3MP sensor.

Design-wise the phone seems pretty new. It emphasizes a gradient finish at the back panel. But there is a very noticeable chin on the bottom at the front panel. The very appreciating part of this phone is its fingerprint scanner. Yes, this is the only phone under Rs 10,000 featuring a fingerprint sensor for security.

The phone is powered packed by a Quad-core MediaTek processor under the hood and comes in a single variant: 3GB RAM and 32GB ROM. It is expandable to 64GB via a microSD card. The devices come with a 3,000mAh battery which lives up to a day in its normal media consumption.

The Samsung Galaxy M01 core is the most affordable phone in the M series, mainly targeting entry-level users. The phone comes with a decent 5.3 inches PLS IPS display screen. It has an HD+ panel with a 720 x 1480 pixel resolution and an aspect ratio of 18:5:9.

On the Galaxy M01 core, Samsung has tried a unique design on its back. The back panel features the stripes design, which makes a comfortable grip. There is a single 8MP camera inside the pill-shaped module with LED flashlight below it. There is a 5MP camera for taking selfie photos to the front.

There is a Mediatek MT6739 chipset under its hood, and it has a Quad-core processor, which clocks the maximum speed of up to 1.5GHz. Moreover, the graphics are handled by PowerVR GE8100. The phone comes in two memory options: 1/2GB RAM and 16/32 GB ROM.

The device comes with a 3000mAh battery giving up 14 hours of power under the basic Internet browsing over the 4G LTE network. The phone is built on Android 10 Go Edition and comes in three color options: Black, Blue, and Red.

3) Samsung Galaxy A2 Core – Most affordable

The Galaxy A2 Core phone features a 5.0 inches PLS IPS display with 540 x 960 pixels. It has an aspect ratio of 16:9. The display seems not so impressive. However, the most contrasting feature of the phone is its processor. The phone comes with Exynos 7870 chipset, which is the best for its price.


The chipset is supported by the Octa-core processor, which clocks at the maximum speed of 1.6GHz, and Mali-T830 MP1 handles the graphics. Talking about the memory, the phone comes with 1GB RAM, whereas it comes with 8/16GB of ROM. Also, the phone is expandable via a microSD card.

The phone features a single 5MP primary sensor at the back and an LED flashlight. Likewise, there is also a 5MP sensor at the front for selfie cameras. The phone comes with a 2600mAh battery, which lasts enough for primary usage like media consumption.

Lava Benco V7 is next phone under Rs.10,000. Yes, you heard it right. Although people might not hear the Lava brand smartphones nowadays, the Benco V7 offers useful hardware and software features.
The phone features a 6.1 inch LCD. Since it’s a huge display, it provides an incredible viewing experience. There is a teardrop notch at the top of the front panel housing the 5MP selfie camera, whereas, at the back, you get an 8MP sensor and an LED flashlight. Both the camera clicks the decent pictures.

There is a Unisoc SC9832e chipset under its hood. Also, the graphics are handled by Mali T820. The phone comes with 2GB RAM and 16GB onboard storage in terms of memory, and it is expandable using a microSD card.

Next up is the Nokia 2.2. The affordable smartphone for entry-level budget users. The phone has a 5.71-inch HD+ display with a resolution of 720 x 1520 pixels.
Design-wise, the phone looks very smooth and appealing. Comparatively, it has a thin chin at the bottom, which makes the phone look more attractive, even though the phone comes with a plastic back and plastic frame.

The phone currently runs on Android 9.0 (Pie), but it is one of the affordable smartphones that will obtain the Android 10 update. It has the Mediatek MT6761 Helio A22 chipset under its hood, followed by the Quad-core Cortex-A53, which clocked the maximum speed of 2.0GHz. For the graphics part, the PowerVR GE8320 GPU handles the phone.

Talking about the cameras, the phone features a single camera setup at both the front and back panels. The rear panel comprises a 13MP shooter, whereas the front panel includes a 5MP selfie shooter.

The images produced by both of these cameras look vibrant and beautiful. The phone has a 3000mAh battery, which seems sufficient for everyday usage. Although there is no fingerprint unlock on it, it still has the facial recognition system.


Starting with Nokia C1 Plus and Nokia C2, the phone is very similar in terms of design and display. Both the phones feature a decent LCD screen. However, the latter has a slightly bigger 5.7-inch display than the Nokia C1 Plus’s 5.45-inch display. Both devices run on Android 9.0 (Go edition), and a Quad-core processor powers them.


Both the phone is available in 1/16 GB: single variant in terms of memory. Besides, the phones are expandable using a dedicated MicroSD card.

There is a single camera residing in the pill-shaped module at the back panel. The camera features a 5MP sensor along with an LED flashlight. Both the phones are capable of capturing the videos on 720p at 30fps. Similarly, there is also a 5MP sensor for selfie photos on the front.

There is no fingerprint scanner for security, yet the phones still have the software-based face unlock feature. The significant difference between the phones is their battery size. The Nokia C1 Plus comes with a slightly smaller 2500mAh battery than the 2800mAh battery of Nokia C2.

Buy Nokia C1 Plus From Daraz

It is very necessary to have a certain knowledge of smartphones before buying them, especially on budget smartphones. Otherwise, you might throw your money on unnecessary pools and might regret your whole mobile phone journey. There are certain things to look for, before purchasing the budget smartphones.

Operating system: The Android phone’s OS has been magnificently evolved over the last few years. From Android 1.0 to the latest Android 11.0 the Google’s Android operating system has very strong ventures. With the updated Android Operating system you can get the latest service offered by it. So before purchasing the budget phones make sure to check whether the running OS fulfills your requirements or not.

Components: The other most important thing to consider before buying budget phones is their components. The RAM, ROM, Cameras, Processor, battery are the significant components in the Android phone. Though budget phones do not provide high-end components yet the consumer still has to look for the required RAM, Storage, and other components.

Model year: It is also very necessary to look for the release date of the budget phones. The cheaper smartphones may also be older models. The older model-year means older OS and its components. Though, some older models are capable of running updated OS. So, check out the initial release of the phone and also which OS it can run.