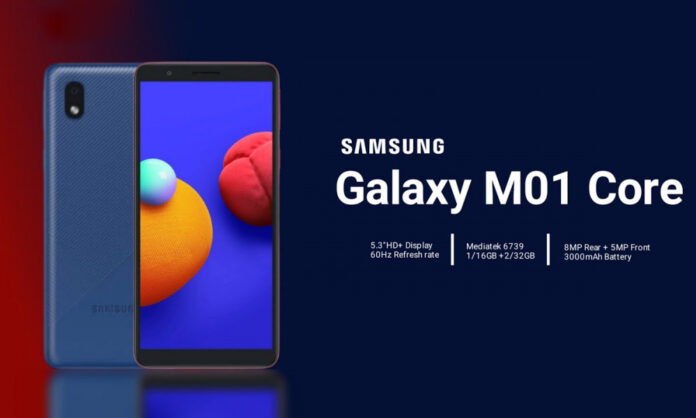 Samsung has finally launched the cheapest phones among the M series smartphone Galaxy M01. The significant audience of this phone is entry-level users. Let us look at what Samsung Galaxy M01 offers in terms of specifications, camera, and other features.

The new phone, Samsung Galaxy M01, has a very low-end specification as it is the cheapest M series. The phone comes with a 5.3 inches PLS IPS display with 720 x 1480 pixels. The phone runs on Android 10, which is a Go edition. With only a single camera, the phone may not be useful for photogenic peoples.

As the phone is very cheap, expecting a cool design would be a fool’s choice. Samsung Galaxy M01 has a very outdated design as it comes with traditional bezels.

We can see stripes design all over the back cover on the back panel, which seems okay. The pill-shaped design is used on the back featuring a single camera and an LED flashlight. On the front, the chin is similar to that of J2 Core, which means there is no space for a physical button and branding. Other than that, the phone has a thickness of 8.6mm and weighs around only 150g.

Coming to the display, there is a 5.3-inch PLS TFT touchscreen that features HD+ resolution. The device has 720 x 1480 pixels having a 311 PPI density.

Samsung Galaxy M01 core is equipped with MediaTek’s MT6769 chipset. This chipset runs on Quad-core 1.5 GHz Cortex-A53 processor, which clocks at 1.5 GHz. For the graphical contents, the phone works on PowerVR GE8100. The phone runs smoothly for basic usage, but it is advised not to run the very high graphical contents.

On to the memory, the phone comes with two variants: 1GB RAM and 16GB of storage and 2GB RAM and 32GB storage. The phone is expandable up to 512GB using a dedicated microSD card.

The Galaxy M01 core has two cameras on the phone. One can be found at the back and another at the front. There is a single camera with an 8MP sensor and f/2.2 aperture in the rear panel. With this sensor, the phone can shoot a video of 1080p at 30fps, and it supports autofocus too.

Likewise, a 5MP selfie camera for selfie lovers at the front panel has an f/2.4 aperture.
The camera takes pretty okay clicks but does not expect a sharped and detailed photo from the Samsung Galaxy M01 core.

The phone has a battery of 3000mAh inside the body. The 3000mAh battery provides 11 hours of offline video playback and 14 hours of Internet browsing. So, being carefree, people can use it for a day. Likewise, when the battery drains, the phone can be charged through a micro-USB port.

The other features include the support of GPS and GLONASS. For the connectivity, it supports Wi-Fi 802.11 b/g/n, as well as it supports Bluetooth 5.0. The phone has Accelerometer, but it does not support a fingerprint scanner for security.

The official price of the Samsung Galaxy M01 in Nepal is Rs.8,999 for the 1/16GB variant and Rs. 9,999 for 2/32GB. The phone can be purchased through any of the stores available in Nepal. If you are on a low budget but need a smartphone, then definitely Galaxy M01 would be a good choice.