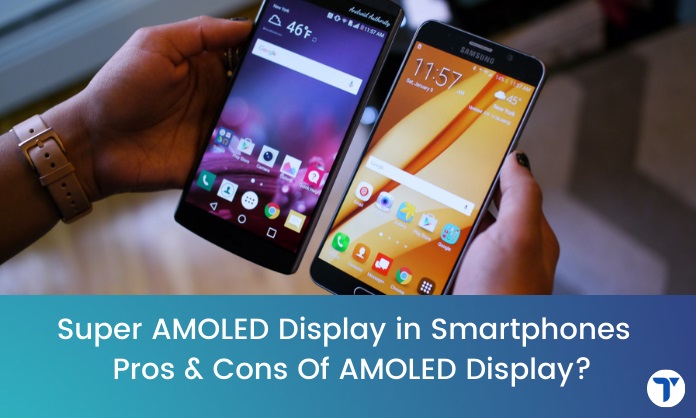 Smartphones have become one of the major influencing factors for displaying display screens. The evolution of technology that smartphone manufacturers have been using to uplift the performances of their products and provide their users an immersive experience has crossed many boundaries resulting in a high-end touchscreen system like Super AMOLED display. AMOLED stands for Active-Matrix Organic Light-Emitting Diode and is an advanced version of OLED.

Introduction: What are OLED Displays?

OLED displays consist of organic materials that emit light in response to an electric current. Unlike LCDs, OLED requires no polarizing filters or backlight for multi-color display since it produces its visible light. This contributes to lower power consumption and slimmer screen size devices but higher resolution.

However, standard OLED displays are Passive-Matrix based, where each row in the display is controlled sequentially. In contrast, AMOLED technology adds a Thin-Film Transistor array that acts as a switch for direct access to individual pixels, allowing greater control over the emitted light.

Super AMOLED is an improvised AMOLED display that integrates touch sensors within the display, thus eliminating any additional layer for touch detection, and also offers a wide range of colors with incredible clarity. Nowadays, Super AMOLED displays are being used in most high-end smartphones by many world-renowned companies.

Samsung has considered the introductory advocate of Super AMOLED display with its release of the Galaxy S series serves as a new generation high-end smartphone display system. Although the higher contrast ratio AMOLED screen achieves in the dark surrounding, there are issues of disturbing glare and poor readability in exposure to direct sunlight or high ambient light conditions.

Samsung has addressed this concern through a Super AMOLED display with a reduced number of reflective surfaces and low power consumption while still maintaining vividness on the image display. Besides its super high definition display quality, the flexibility and curve-ability of the Super AMOLED display have created space for new possibilities which are genuinely in the next level.

Galaxy Note 20 Ultra by Samsung is its latest design that features curve edged screen display. Other companies have already adopted this approach for their new smartphone models, such as the OnePlus 8 Pro, Motorola Edge, Vivo X50 Pro, Xiaomi Mi 10, and Huawei’s P40 pro.

The self-emitting diodes in the Super AMOLED display have faster reaction speed and higher contrast level that helps obtain a more detailed and interactive display.

Its innovative nature exhibits progressive prospects of AMOLED display shortly, including Dynamic AMOLED with added HDR10+ support display panels and Infinity-O display on notch-less smartphones. However, it has some downsides as well. They are available only in high-end models, often too expensive and limited editions.