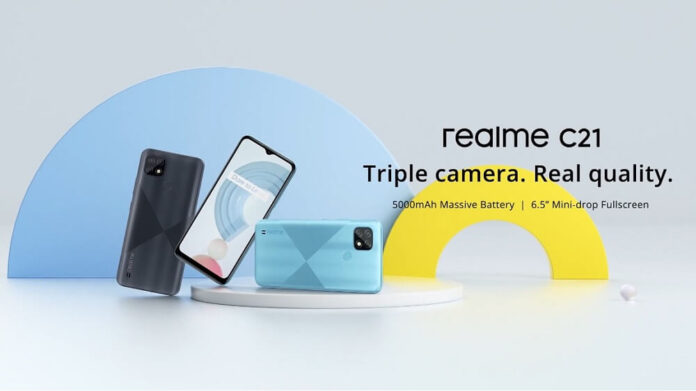 The device has officially debuted in the Malaysian market and is officially priced at RM 499 for the 3 GB RAM with 32 GB storage configuration.

Realme C21 is the latest budget-oriented device from the company. It comes after the Realme C20 launched back in late January and shares many similarities with it.

The Realme C21 brings some updated designs to the table. The C20 features a vertical stripe from the camera module to the bottom of the panel, whereas the newly launched C21 features a Geometric design.

The back panel features a square camera module on the top-left and a speaker grill on the bottom left corner, along with the company logo. It also features a fingerprint sensor. The company claims that Realme C21 is the first in the industry to pass TÜV Rheinland Smartphone Quality Certification.

It offers a 6.5 inch IPS LCD panel with an HD resolution of 720 x 1600 pixels in a 20:9 aspect ratio. The screen features a waterdrop notch to house the selfie camera and is surrounded by minimal bezels on the side. However, the device’s bottom chin is quite noticeable, so the screen-to-body ratio of the device is 89.5%.

It is powered by a MediaTek Helio P35 processor with an IMG GE8320 GPU. The Helio P35 is an octa-core processor based on a 12 nm process used in past devices of the C series from Realme C11 to the recently launched Realme C20.

It is paired with a memory configuration of 3 GB RAM with 32 GB of internal storage. There is an option to extend the memory of the device to 256 GB with a dedicated microSD card slot. As for software, it runs on RealmeUI 1.0 based on Android 10, out of the box.

Both of these camera setups can record up to 1080p videos at 30 fps.

Realme C21 packs a massive 5000 mAh battery with 10W Charging over MicroUSB 2.0. It also has support for reverse charging. For biometrics, it offers a rear-mounted fingerprint sensor. For the connectivity option, it offers Wi-Fi 802.11 b/g/n, Bluetooth 5.2.

Realme C21 is now available for purchase in Malaysia and is officially priced at RM 499, which is roughly around $122. The device is expected to launch in Nepal soon with a price tag of Rs 15,500.