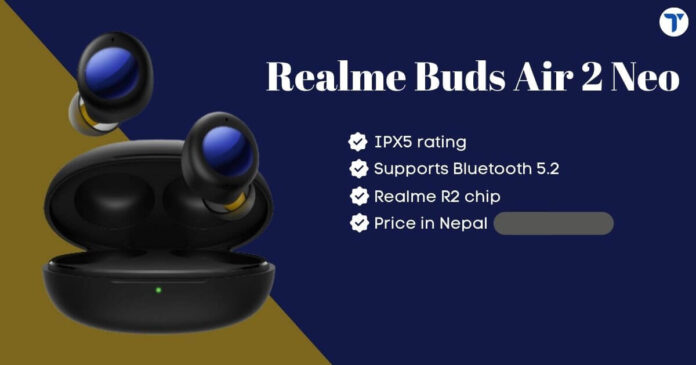 Realme Buds Air 2 Neo has a cobblestone shape encased in a gleaming exterior. They are available in two color options: Active Black and Calm Grey.

In addition, the earbuds have an IPX5 rating for water splash and sweat resistivity.

Realme has provided the earbuds with Intelligent Touch control. On double-tap, you can play or pause the music and answer or end the call. Likewise, the triple tap will let you go to the next song.

The earbuds pack a Realme R2 Intelligent Noise Cancellation chip. The chip has a professional noise cancellation ability along with ultra-low power consumption and stable connectivity. In addition, the ANC technology of the earbuds reduces the surrounding noise by up to 25dB.

Realme Buds Air 2 Neo has a dual-mic noise cancellation for calls. As a result, the earbuds significantly reduce the surrounding noise and allow you to hear more clearly.

The driver in the earbuds is 10mm LCP (Liquid Crystal Polymer). During the gaming mode, the latency is super low, with 88ms.

Transparency mode on the earbuds allows you to hear people talking around you without taking out the earbuds; you can turn on the mode and chat with people.

The earbuds have a dual-channel transmission left and right in perfect sync. In addition, both the earbuds transmit sound at the same time by reducing latency and lagging. As a result, syncing errors at in-game moments are avoided.

The earbuds connect via Bluetooth 5.2 and provide fast and stable connectivity. It is the newest generation of Bluetooth.

You can also customize Realme Buds Air 2 Neo with Realme Link App, available for Android only for now. It lets you set the noise cancellation level, turn on the Gaming mode, adjust the equalizer, and so on.

Each earbud has a 40 mAh battery, while the charging case has a 400 mAh battery. So, the total battery of the Realme Buds Air 2 Neo is 480 mAh.

They have 20 hours of playtime with ANC on. Likewise, the earbuds have 5 hours of single playback time. And 3 hours of playback is achieved with 10 minutes of charge.

The amount of remaining battery will pop up on the screen of the paired smartphone.

Some of the other earbuds available in Nepal are AQFit TWS Earbuds and Samsung Galaxy Buds Pro.