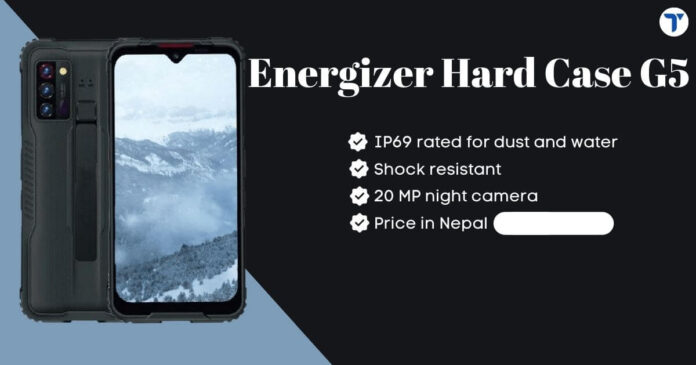 A week ago, we witnessed the launch of a rugged smartphone as Doogee S97 Pro. We also have already covered other powerful smartphones like Motorola Defy (2021) and Samsung Galaxy XCover 5. But, again, a new rugged smartphone has made its entry. Avenir Telecom has unveiled its first-ever Energizer-branded 5G phone as Energizer Hard Case G5 on 30th June 2021. The expected price of Energizer Hard Case G5 in Nepal is NPR 85,000, as the price in the US is $600, which is around NPR 71,317.

Energizer Hard Case G5 has a 6.3-inches LCD. In addition, the display flaunts a resolution of 1080p. Similarly, it has a Gorilla Glass 5 protection on the front.

The front camera sits in a dewdrop notch at the top-center, where the rear panel has a vertical camera set up inside a rectangular module. Likewise, the display has thin bezels on the side and a thick one on the chin.

The smartphone is IP69 rated for dust and water resistance. It can survive in water of 1.2m depth for half an hour. Likewise, the device is sealed hermetically to resist the water. It can also survive the drop from 1.2m heights.

The smartphone’s exterior is made out of several layers; it has solid industrial rubber making the Hard Case G5 shock resistant. In addition, a special liner is present on the smartphone to help it withstand electrostatic shocks.

Powering the smartphone is a Dimensity 720 chipset with a 7 nm fabrication process. It has 2x Cortex-A76 cores. Likewise, the Mali-G57 MC3 GPU looks after the graphics of the Energizer Hard Case G5. Further, the memory option for the smartphone is 6 GB of RAM with 128 GB of inbuilt-storage; the storage is expandable via a microSD card.

The smartphone also has dual-slot SIMs. Energizer Hard Case G5 boots on Android 11 out of the box.

Energizer Hard Case G5 has a triple-camera setup on the rear. It has an interesting camera setup as it has a 20 MP night camera; it can see in the dark with the help of an infrared illuminator. Other cameras are a 48 MP primary sensor and a 13 MP ultra-wide camera.

The selfie camera of the Energizer Hard Case G5 is an 8 MP sensor.

It charges via a USB Type-C charger. Likewise, a full charge is enough for 9 hours of talk time.

Avenir also launched Energizer Ultimate U680S; it is a 4G smartphone and is budget-friendly. It has a 6.8 inches IPS LCD screen and a resolution of 1640 x 720. In addition, the smartphone has a water-drop notch housing the selfie and an aspect ratio of 20.5:9.

Powering the smartphone is a UNISOC SC9863A processor with a 28 nm fabrication process; the chipset is also available in other entry-level smartphones. Further, the device has 2 GB of RAM and 32 GB of expandable storage.

Fueling the smartphone is a 7,000 mAh battery that charges via a USB Type-C port.

Oppo Reno 3 Launched in Nepal: The Cheaper version of Oppo...