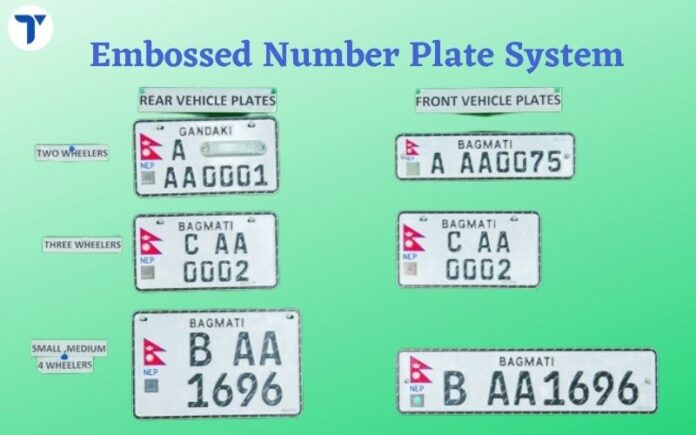 The best part of implementing an Embossed number plate is revealing everything about a particular vehicle just by a simple license plate scan.

The Department of Transport Management (DoTM) is looking to expand the implementation of new license plates for all the new motor vehicles. The new vehicles imported from July 16 will only be issued number plates, while the existing number plates have to install the embossed number plate before applying for renewal of their registration.

The government planned this step to go digital, as in the smart license cards. The DoTM has initially resumed the new number plate system in Bagmati Province for two, three, and four-wheelers.

What is Embossed Number Plates?

Embossed number plate has an English character containing a Vehicle Lot Code, State No., Vehicle Type and a Vehicle Number. Information about the vehicle status as well as the owner will also be there on the plate. It will have a digital signature of authority.

There is an attachment of a seven-digit chip with a secret number that can be located at any time in case of thief or accident as this chip records the information’s like engine number, chassis number, registration number, and other required details. An embossed number plate is camera readable. It helps to prevent the duplication of a number plate.

The plan of implementing an embossed number plate system for the first time came a decade back that’s included in the three-year interim plan of 2007.

In early 2017, DoTM contracted with Decatur Tiger IT, a Bangladeshi Company, to supply and install the embossed number plates by awarding NPR 4.78 billion. The government began to implement in 2017 as per the province structure. But there was a controversy on using English letters and numbers instead of Devanagari script as it was government work. Environmentalist Bharat Basnet also stated,” The chip on the number plates could also be used for spying and breaching national security” Thus, later on, in 2018 February, there was an order to stop issuing embossed numbers plate system by the Supreme Court.

In 2019, the court cleared the issue and opened a way for DoTM to resume the process. Therefore, the DoTM has started installing embossed number plates on the vehicles with the ease of lockdown.

Why to apply for Embossed number plate in Nepal?

What are the requirements to get Embossed Number Plate?

If anyone is thinking of applying to an Embossed Number Plate, they must have the following requirements given below:

How will Embossed Number Plate Charge?

DoTM has allocated the fee depending upon the size of a vehicle.
If you have registered your vehicle in the province, the list of the charge for different types of vehicles to get Embossed number plates is given below in the table.

DoTM has informed that the vehicle owner should clear all the taxes and deposit the specific amount in the department’s bank account to get an embossed number plate.

Where to apply for Embossed Number Plate according to the Vehicle Type?

To apply for an Embossed Number Plate, you can visit the official website of DoTM (https://www.dotm.gov.np/) and or ( https://hsenp.dotm.gov.np/everest-pub ) to fill-up the form. You have to fill in all the required details and get a print of the form.

You can also follow the whole procedure by clicking on: https://tinyurl.com/9zsfxwd7

According to DoTM, in the first phase, high-security plates will introduce for the vehicles registered in the Bagmati Province. DoTM has allocated the location for the installation purpose, which’s shown in the table below:

“Once it is made mandatory, the Department will monitor and give suggestions.” Even after that, if the embossed number plate is not connected, the process of action will also start,” Poudel said ahead.

What are thoughts regarding the government making embossed number plate mandatory in the country? Put your thoughts in the comment section below.