Samsung Galaxy F62 with Exynos 9825 launched in India, may launch soon in Nepal 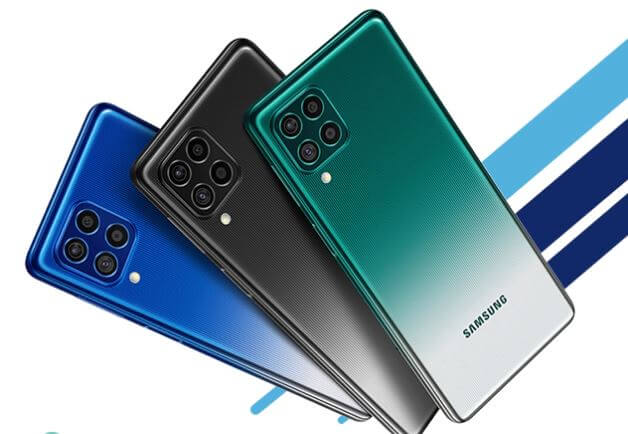 Samsung Galaxy F62 is similar to the Samsung Galaxy M51 but with a more powerful SoC. Always been ahead of its competitors, Samsung has brought the flagship processor-7nm Exynos 9825- in Samsung Galaxy F62. The phone is excellent in terms of software and battery; it also has NFC. Overall, the smartphone is indeed full of speed in every aspect.

Samsung Galaxy F62 has a 6.7 inches Super AMOLED+ display with a resolution of 1080 x 2400 pixels. The display has thin bezels around it. Next, it has Gorilla Glass 3 protection on the front while the back is plastic. Similarly, due to the massive battery, the thickness of the phone is 9.5mm. The rear panel has vertical stripes with a laser gradient finish.

A quad-camera setup is at the top-left corner inside a square module, while the selfie is a punch hole at the top-center. The phone weighs 218 grams. Likewise, the phone is available in three color variants: Laser Green, Laser Grey, and Laser Blue.

A dedicated SIM card tray is on the left. You can keep the SD card on one side and two Nano-SIM cards on the other side. On the top edge, it has an IR blaster, whereas the bottom has a 3.5mm headphone jack, USB Type-C port, mic, and a secondary speaker. Following this, the right edge has a power button and a volume rocker.

A side-mounted fingerprint sensor lies within the power button. Face unlock is also available. Both of them are very fast and reliable.

The flagship Exynos 9825 (7nm) powers the phone with an octa-core CPU clocking up to 2.73 GHz. Further equipped with Mali-G76 MP12, it delivers powerful graphics performance. Multitasking and gaming are great to handle, even for a long time. The processor is battery efficient. Further, the RAM and storage variants are; 6/128GB and 8/128GB; expandable via microSD card up to 1TB.

Samsung Galaxy F62 boots the latest OS: Android 11 based on One UI 3.1. It has the latest Android security patch level. Similarly, it has Knox security of 3.7 version, which is available only in the flagship range smartphone.

There are 14 options for the single-take feature. There is also a super-steady mode for a video giving excellent stabilization; Super slow motion is another feature. Night hyper-lapse lets us capture time-lapse video in low light.

The selfie features a 32MP sensor with an f/2.0 aperture.

The selfie has AI, which widens the frame if more people join the picture.

Video of up to 4K at 30fps is recordable from the rear camera and the front camera.

Having the full speed in the performance would mean nothing if the battery was average for the phone. But Samsung has not let down in terms of its battery too. Samsung Galaxy F62 packs a giant 7000 mAh battery, ensuring two days of non-stop entertainment.

The phone is launched at the starting price of INR 23,999 in India and will go for sale from 22nd February through Flipkart. We can expect the price of the Samsung Galaxy F62 to be around NPR 42,999 for 6/128GB and NPR 45,999 for the 8/128GB variant in Nepal. There are two authorized distributors of Samsung devices in Nepal; Integrated Mobility Solutions (IMS) and Him Electronics Pvt. Ltd. The phone may launch anytime soon.

The phone will compete against Xiaomi Mi 10i and OnePlus Nord.