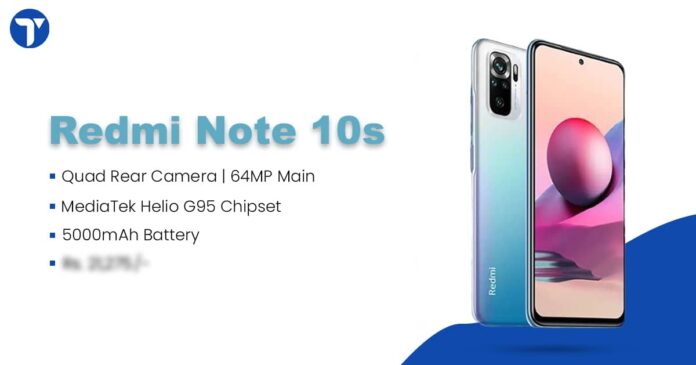 Redmi Note 10 series is one of the most dominant products of the brand with three of its variants already released: Redmi Note 10, Note 10 Pro and Note 10 Pro Max. Redmi has recently launched Note 10s, a new model in the series, in other countries but yet to launch in the Indian market. It is superior to other variants in terms of performance and some specs.

Redmi Note 10s resemble other variants but comes with some hardware upgrades. It features a 6.43 inches display with a 13MP front camera and a quad rear camera setup. Unlike other models, it integrates MediaTek Helio chipset and carries a 5000mAh battery.

It features a 6.43 inches FHD+ Super AMOLED display with a resolution of 1080×2400 pixels and a 60Hz refresh rate. The display screen has 20:9 aspect ratio and supports an 8-bit color depth and a peak brightness of 1100nits. The fingerprint scanner is side mounted.

Redmi Note 10s is powered by a 12nm MediaTek Helio G95 chipset with an Octa-core processing, making it better performing than its predecessors featuring Snapdragon 732G. The Operating System runs on Android 11 with MIUI 12.

It comes in two RAM variants of 6GB and 8GB with internal storage options of 64GB and 128GB. A dedicated slot for microSD allows storage expansion up to 512GB. It is a dual SIM with Nano SIM card support.

The rear camera can record 4k videos at 30 frames per second while the front camera supports Full HD video recording at 30fps.