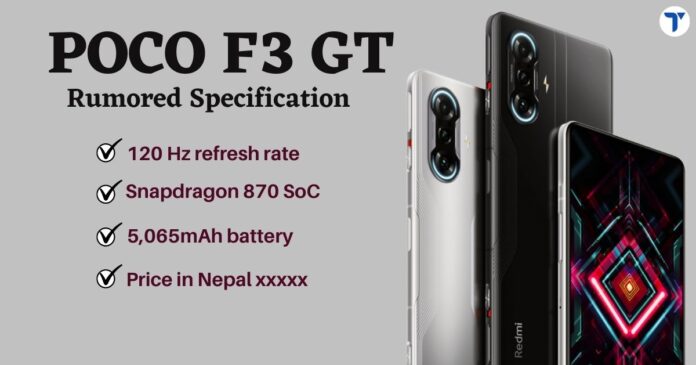 Poco F3 GT is an upcoming smartphone by Poco. Poco F3 GT will likely be a rebranded version of the Redmi K40 Gaming Edition launched in April in China. None of the tweets have specified any launch date, but it is rumored that Poco might disclose Poco F3 on the same date when the OnePlus will launch its Nord 2 on July 22. Therefore, it is likely to have a direct competition with the upcoming OnePlus Nord 2.

The Poco F3 GT may come with a 6.67-inch OLED display with a 120Hz refresh rate, 480Hz touch sampling rate, HDR 10+, and punch-hole cut out for the selfie shooter. The Poco F3 GT is rumored to be powered with the MediaTek Dimensity 1200 SoC coupled with 12GB of RAM and internal storage of 256GB that is further expandable via a microSD card.

It is believed that MediaTek Dimensity 1200 processor powers the Poco. It is expected to offer up to 12GB RAM and 256GB of internal storage. The phone should feature a side-mounted fingerprint sensor for security and may run on Android 11-based MIUI 12. It has a dual Nano-SIM operation.

The smartphone probably features a triple rear camera having the main camera of 64-megapixel, an 8-megapixel wide-angle lens, and a 2-megapixel macro lens. To click beautiful selfies, it has a 16-megapixel camera at the front.

Poco confirmed that the POCO F3 GT will be launching in Q3 2021 and is expected to debut in the first half of August 2021. The phone is available in three color options. i.e., Black, Silver, and White

Samsung Galaxy A22 4G Launched in Nepal With Some Attractive Features