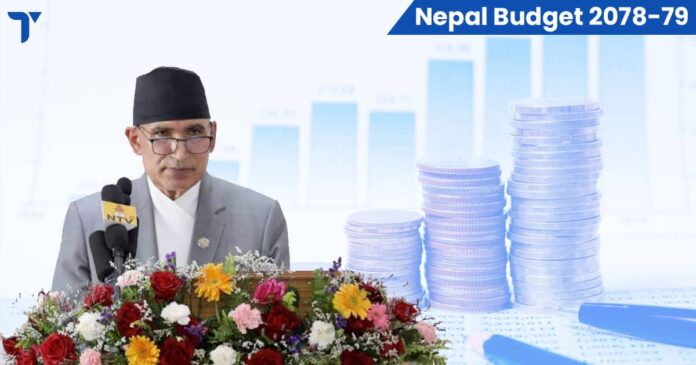 Nepal government has published the annual budget plan for year 2078/79. The total capital of 1 trillion 647 billion and 570 million (16 kharba 47 arba and 57 crore rupees) has been declared. Finance Minister Bishnu Prasad Poudel announced the budget amount along with the strategies of budget allocation on several economic sectors.

41.2% of total budget has been allocated for regular expenditure. This share amounts to 678.61 billion rupees which the government will be investing on several industrial areas including technology, innovation and education. The outbreak of Covid-19 has majorly affected the economy of many private businesses, so the budget allocation for financial management also aims to compensate the losses at some extent.

The fields of technology and entrepreneurial innovation have been playing a significant role in the sustainable growth of a nation. Hence the Nepal government has planned to promote digitization and technological development through its new budget strategy. This plan will also be a boost to Digital Nepal Framework.

Following are some of the major sectors taken in consideration for the budget allocation:

The health sector of Nepal will soon start operating telemedicine services. With the strategy of telemedicine, the government aims to encourage the implementation of electronic means to provide health facilities, particularly to rural regions.

This provision will make it easier for people living in rural areas access health facilities remotely via tools like online health services. Likewise, the capacity of the National Health Laboratory will be extended so that almost every type of medical sample testing will be conducted within the country.

In order to integrate digitization in education, the government plans to provide broadband internet connection for all the community schools in Nepal. The students of high school and secondary level will be able to get a loan of up to Rs. 80,000 with only 1% interest rate, to buy a laptop for study purpose. The students above 16 years’ will also get a SIM card for free.

The government will be initiating its dedicated e-learning portal, Sikai Chautari where students from any institute can get access to various educational resources online. Young student entrepreneurs will also get a startup loan of up to Rs. 2.5 million at 1% interest rate with an exclusion of profit tax for five initial years.

Citizens will be able to access land related services simply using tools like Mero Kitta and Nelis. It helps people find their land property details online and also print necessary documents such as digital map and plot register print. The government aims to digitize most of its land-related processes which will completely shift District Land Revenue Offices online.

Moreover, digital soil mapping system will be implemented for productive soil testing. Usage of mobile apps will be promoted to get information concerning farm products and their prices, availability of seeds, pesticides, and farm inputs to the farmers.

The government will introduce vehicle tracking policy to stay updated with transportation movements. Radio frequency installed number plates will be provided for vehicles and drivers will get electronic license that keeps track of their movement and location. This protocol will act as an anti-theft approach and also find the vehicle location in case of accidents.

Electric vehicles will be another emphasis on transportation development. Kathmandu’s popular public transport company Sajha Yatayat will be operating a minimum of 100 electric buses with e-ticketing system. More Public-Private partnership will be proposed for installing around 500 electric vehicles charging station, terminal building, and other infrastructures.

In collaboration with private sectors, the government will give more priority on made in Nepal products and sponsor them via several virtual trade shows to expand the exposure in international market. Innovative companies will get lease free land for manufacturing electric vehicles. Effective e-commerce policies like postal services will be implemented to support e-commerce industries.

The Digital Nepal Framework-2075 will catch a higher pace. The budget allocation for the uplift of the digital economy of the country will be big push to the framework. Public service sectors such as local level schools, public offices, and police stations will have full connection of broadband internet service within 2 years. Installation of optical fiber has already been undergoing.

Another major implementation will be Nepal government’s all in one purpose digital system, Nagarik app. The final version of the app was released on May 2021 and it is gaining rapid popularity among the citizens. It has been announced to integrate more services like bill book renewal and Malpot to the app.

The finance minister also stated about the plan of Nepal government to bring the most awaited Unified National Payment Switch in operation. This scheme will integrate every existing digital payment platforms and enable online transaction via single system. The system is currently in its development phase under a project held by Nepal Clearing House Limited (NCHL).

QR benefits is another strategic approach made by the government in which consumers will receive 10% VAT refund on products purchased and paid for using QR code scan. This initiative will encourage more people to prefer QR code payment which plays a vital role in progressing the digital economy of the country. The integration of QR code in Passport has also been mentioned.

The government aims to expand 4G network coverage throughout the country to every local level within next fiscal year. In addition to that, optical fiber will be laid across major highways which will execute high speed information highway for highly enhanced transmission backbone network. Rural Telecommunication Development Fund will also come in operation to provide broadband internet at rural sectors of Nepal.

A new policy called Mobile Device Management System has been introduced to monitor the smartphones and tablets market of Nepal. According to this policy, network devices like smartphones and tablets should be imported only through the official channel of the government. Devices brought form illegal channels will be blocked and get no access to any network. This will avoid revenue loss caused due to illegal channel import.

The budget allocation announcement has also opened a new opportunity for investors. As announced, the Nepal Telecom customers can now buy a share of the company. NTC will allocate 22% of its share for mobile, landline, and internet customers using their network. The telco currently has over 91% share owned by the government, however, the upcoming initiative will allow wider participation from general public.

We have been well aware of the fact that every year Nepal government presents a large amount of budget with highly motivated strategies. Nonetheless, we are also familiar with the trend of the result not meeting our most anticipated expectations. Despite of a huge capital allocation and calculated plans, the government fails to fulfill its goals.

How is it going to differ this time with all the ongoing obstacles like global pandemic and nationwide political influence? What if like past years, the budget allocation couldn’t bring any development in the nation and whom to blame for that? There are so many suspicions to clear regarding the budget plan. We can only hope for the proper utilization of allocated budget and sustainable implementation of proposed plans.