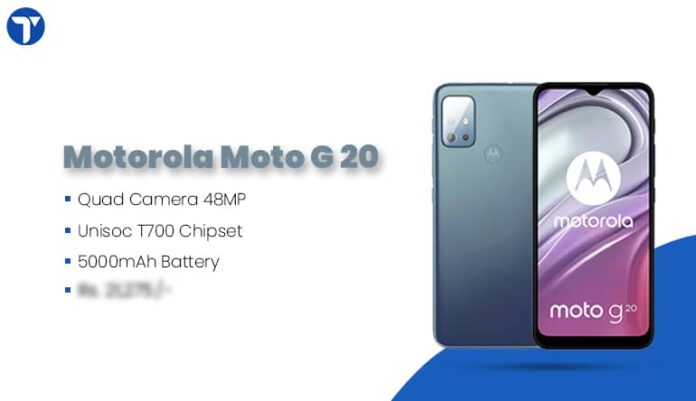 Moto G20 features a 6.5 inches IPS LCD display with a 13 MP selfie shooter and quad rear camera. It comes with a Motorola based Unisoc chipset and carries a heavy-duty 5000mAh battery.

It has a slim design with a body completely made up of plastic, weighing around 200g. It has a dimension of 165.2 x 75.7 x 9.1 mm. The front section houses a teardrop notch for front camera placement. You can find two color variations: Breeze Blue and Flamingo Pink.

It features a 6.5 inches IPS LCD panel with Max Vision Display. It gives a 90Hz refresh rate and has an HD+ resolution of 1600 x 720 pixels with an aspect ratio of 20:9 and 270ppi pixel density. The phone is IP52 certified dust and water spray resistant.

Moto G20 is powered by Unisoc T700, a specifically designed Unisoc chipset for Motorola devices. The chipset has two Cortex-A75 cores and six Cortex A55 cores. Mali G52 is used for graphics processing.

It comes with a single memory configuration of 4GB RAM and 64GB internal storage. The storage is expandable using MicroSD on a shared dual-sim slot. It operates Android 11 with Motorola’s My UX

A quad camera is available for rear shooting, fitted with a 48MP primary camera supported by an 8MP ultra-wide angle camera with 118˚ Field of View, a 2MP macro sensor and a 2MP depth sensor. It also supports Electronic Image Stabilization (EIS).

The video shooting supports FHD recording at 30fps from both the main and the ultra-wide cameras, whereas macro camera records at 720p for 30fps. The 13MP front camera can shoot FHD videos at 30fps.

It has a Li-Po 5000mAh non-removable battery capable of over two days of power backup of a single full charge. It supports 10W charging through a Type-C port.

The device connectivity includes a dual band Wi-Fi, Bluetooth 5.0, and NFS. A rear mounted fingerprint scanner is used for biometric. It also has a 3.5mm Jack with active noise cancellation via a dedicated mic.