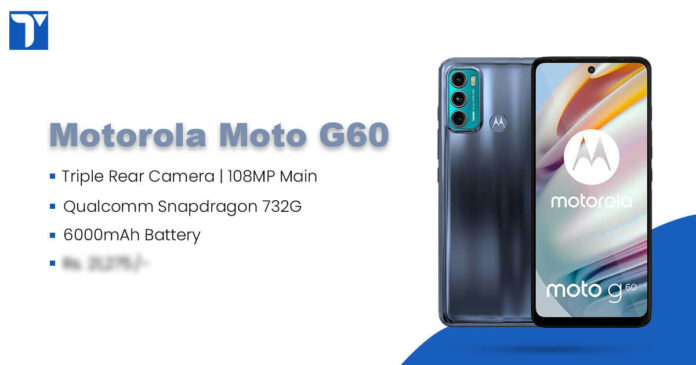 The design and build feature of the Motorola Moto G60 is exactly the same as with Motorola Moto G40 Fusion. It also has a 6.8 inches Max Vision FHD+ display that supports HDR10. Likewise, the refresh rate of the smartphone is 120 Hz.

The smartphone has a punch hole cut out, housing the selfie camera. A triple camera setup lies inside a rectangular module with curved edges on the rear side.

Although the smartphone doesn’t have any IP certification, it has opted for the water repellent design. On the rear, it has a plastic body looking like glass.

On the bottom, it has a speaker grille, USB Type-C port for charging, and a microphone. Similarly, the SIM card tray lies on the left-hand side of the smartphone; it is a hybrid tray. The smartphone houses a Google Assistant button, volume rocker, and a power button on the right side. On the top, it has a noise-canceling microphone and a 3.5mm headphone jack.

The smartphone weighs 225 grams. The color options for the smartphone are Dynamic Gray and Frosted Champagne.

A fingerprint reader lies on the rear panel in a circular module with the logo of Motorola, i.e., M.

Motorola Moto G60 is powered by Qualcomm Snapdragon 732G chipset. It has only one memory option, i.e., 6 GB of RAM with 128 GB of internal storage. The inbuilt storage is expandable through a microSD card up to 1TB.  Similarly, the smartphone employs Adreno 618 for graphical processing.

The smartphone runs on Android 11 OS. It has a feature called My UX, via which you can customize the interface according to your choice.

It has a security feature called Think Shield, which secures the smartphone against malware, phishing, and other threats.

Fueling the Motorola Moto G60 is a massive 6,000 mAh battery. According to the company’s claim, a full charge can back up the smartphone for up to 54 hours. The battery supports Turbo Power 20 charging.