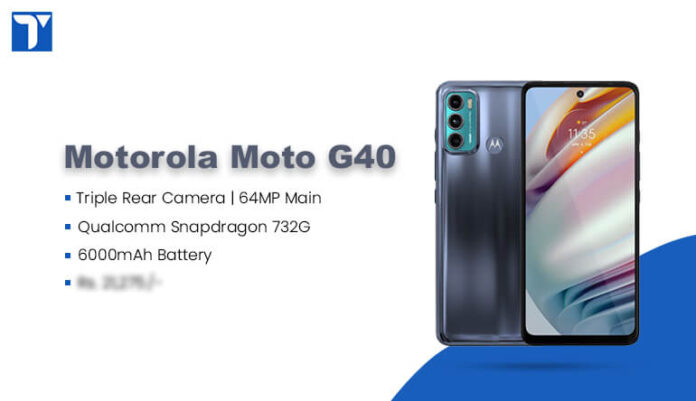 Motorola Moto G40 Fusion has a huge battery with a power-efficient processor. The cameras are versatile, and the design is smart. It also has expandable memory. Let’s know more about the smartphone in depth.

The bezels around the display are ultra-slim. Similarly, the smartphone flaunts a refresh rate of 120Hz, giving a smooth experience during scrolling through web pages, watching videos, or playing games.

Motorola Moto G40 Fusion has a glass front, while the back is plastic. It has a water repellent design, and the side frames are plastic. Likewise, it weighs 225 grams since the battery is huge. The color options for the smartphone are Dynamic Gray and Frosted Champagne.

A rear-mounted fingerprint sensor is available on the smartphone.

Motorola Moto G40 Fusion gets the processing power from Qualcomm Snapdragon 732G, built with an 8 nm fabrication process. It further combines with an octa-core processor, which has a maximum clocking speed of 2.3 GHz. Furthermore, Adreno 618 handles the graphical processing of the smartphone.

Motorola Moto G40 Fusion boots Android 11 out of the box. You can create the look of your own choice using My UX.

Motorola Moto G40 Fusion has a single selfie camera of 16 MP. It has an aperture of f/2.2 with an HDR feature.

The smartphone packs a Li-Po 6000 mAh battery. According to the company’s claims, the battery can last for 54 hours. It supports fast charging of 20W and Quick Charge 4.

Asus Zenfone 8 Unveiled as the New Flagship Smartphone from the...

Motorola Moto G100 with Snapdragon 870G Debuts as the Most Powerful...