JioPhone Next – World’s Most Affordable Smartphone? 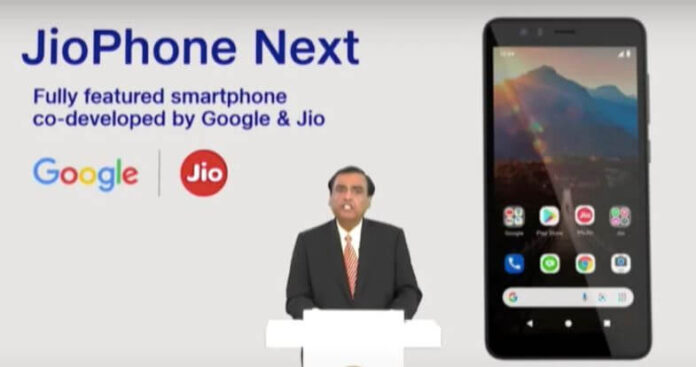 Chairman of Reliance Industries Limited (RIL) and a multi-billionaire, Mr. Mukesh Ambani, launched a new smartphone as JioPhone Next at the 44th Reliance AGM 2021. The smartphone is developed in partnership with Google. It boots on an optimized Android version.

Jio aims to migrate the 2G users to direct 4G network without having to spend more.

Sundar Pichai – The CEO of Google, said, “Our team has made a specially optimized Android version for the phone. It is built for India and for those who will experience a smartphone for the first time.”

The smartphone is fully featured and supports all the apps from Google.

The JioPhone Next may have around 4-inches screen. The display has thick bezels around. It has a single selfie camera and a rear camera. However, the company promises a good camera. The smartphone has HDR mode and Snapchat lenses; the Snapchat lens is directly accessible from the camera.

Some of the features of the JioPhone Next are voice assistant, smart camera with augmented reality filters, automatic read-aloud of screen text, and many more. With language translation, users can translate what is on their screen and have it read back to them in their language.

Google and JioPhone Next Collaboration

The Android operating system powers the JioPhone Next; however, it is not entirely an Android phone. Users will still get access to the Google Play store.

Google has also developed “App Actions” to offer a better experience with Jio apps. Likewise, via Google Assistant, users can ask about the latest cricket scores and weather updates using their voice. On the other hand, via a digital assistant, users can request to play music on Jio Saavn and check the balance on My Jio.

The smartphone will receive major Android OS and security updates in the following years. Although it is unknown about the version of Android, the smartphone is running.

JioPhone Next Price and Availability

JioPhone Next will be available for purchase in India from 10th September 2021 (on the occasion of Ganesh Chaturthi). The smartphone will also be available in other foreign markets; however, there is no information about its launch in the different markets.

Jio claims, JioPhone will be the most affordable smartphone not only in India but worldwide. The price may be around INR 2,499 (around NPR 3,000).

Samsung Galaxy Quantum 2 – The Most Secure Smartphone with QRNG...