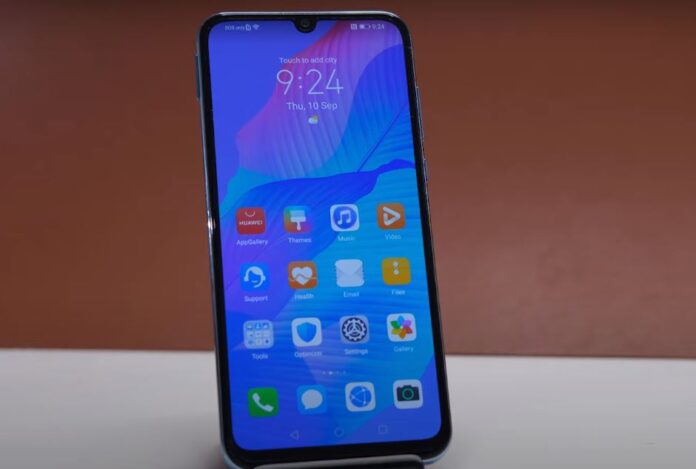 Huawei launched Y9p on 18th May 2020, which is already available for purchase in Nepal.  It is similar to the Huawei Y9s with only a few changes and is the upgrade to the Huawei Y7p. The price of Huawei Y8p in Nepal is NPR 26,990. However, if you rely heavily upon the Google Play Store, you may stay away from the phone.

Apart from its Google Play services shortcoming, it is one of the best mid-range devices. Under display fingerprint scanner, extensive storage, and the OLED display you get with your budget is quite appreciable. The phone has an optical fingerprint sensor even in this budget with an OLED display and a 48MP camera.

Huawei Y8p has a 6.3 inches OLED display with a screen resolution of 2400 x 1080 Pixels. It has an aspect ratio of 20:9. It is made from plastic, as expected, but feels likes a premium device. The display has a U-shaped notch housing a selfie camera. The phone’s display is an absolute stunner with rich contrast and accurate colors. The phone weighs 163 grams. It comes in two color variants: Midnight Black and Breathing crystal.

On the right side of the phone are a power button and the volume rocker, while on the left of the phone is a hybrid Nano-SIM tray. You can either use a dual Nano-SIM or a Nano-SIM and a Nano memory card. Likewise, on the bottom lies a speaker grille, USB Type-C port, and a microphone. On the top are an earphone jack and a noise-canceling microphone.

The rear camera lies vertically on the top-left corner of the phone.

Powering the phone is a 1.7GHz octa-core HiSilicon Kirin 710F processor featuring 4 cores clocking at 1.7GHz and 4 cores clocking at 2.2GHz. The phone packs 128GB of inbuilt storage, expandable up to 256GB via Nano memory card. Furthermore, RAM either 4GB or 6GB. The performance is smooth. Also, the under-display fingerprint scanner is fast but not the fastest.

The smartphone runs EMUI 10.1 on top of Android 10. The most controversial part of the device is its software, which lacks google service. But the phone comes with an App gallery and eventually lacks most of the demanding apps. Although some other third-party stores are available, nothing comes close to the google play store.

Images on the phone are decent for what it takes to good looking images. Also, the quality is good enough. Overall, the primary camera is impressive, especially for the social media platform. The ultra-wide camera is average. What standouts the most is its night-mode images. The night-mode images manage to retain some details even in pitch dark scenarios. However, it would help if you are steady while capturing the picture

The selfie snapper is a 16MP camera with an f/2.4 aperture.The images from the front camera are decent.

Huawei Y8p’s selfie camera can capture the video of 1080p at 30fps and looks fine.

The phone employs a 4000mAh non-removable battery. It can take you for a full day before needing to recharge again. Though it supports 10W fast charging, charging the phone can take more than an hour.

Huawei Y8p price is NPR 26,990 for a 6/128GB variant in Nepal. You can then purchase the smartphone from the official showrooms or any other online and offline stores. And the authorized distributors of Huawei in Nepal are Call Mobility Pvt. Ltd.