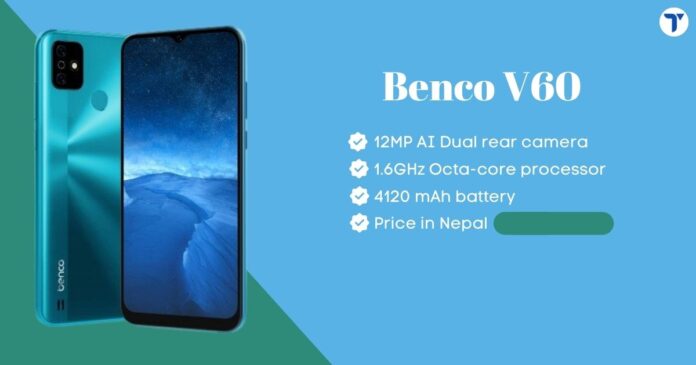 A Chinese company Benco has recently launched its new mobile phone in Nepal. It entered the market with the launch of the V80 series, and it is planning to launch its next model Benco V60 soon in Nepal.

Benco offers an appropriate smartphone under budget in Nepal. It has a dual-camera setup with an entry-level processor that runs on a (Go edition) Android 11. Let’s detail its features, specifications, performance, availability, and expected price in Nepal.

It has a waterdrop-notch for the front camera of 5MP for face recognition. Furthermore, the phone possesses a face to unlock system and can be unlocked via fingerprint identification as this phone has a rear-mounted fingerprint sensor. In addition, this smartphone has an accelerometer sensor, proximity sensor, gravity sensor, and many more.

It has a dual-camera setup at the rear side to capture a beautiful shot, having a 12MP primary camera with LED Flash, autofocus features, and AI implementation. In contrast, the secondary camera is yet to be specified. To capture video, it has a resolution of 1080p @30fbs. For selfies, it has a single setup camera with 5MP, f/2.0.

As for connectivity, Benco V60 has a 3.5mm headphone jack with Bluetooth, GPS, and 4G connectivity. It also has dual-band Wi-Fi with a Type-C port.

Benco V60 is yet to be launched in Nepal, and the price is expected to be around NPR 10,500. It is available in color options, mainly Blue and Greenish Silver.

Also look at Benco V80 – A low budget Smartphone With A 5000 mAh Battery, Launched in Nepal for more information on Benco V80.