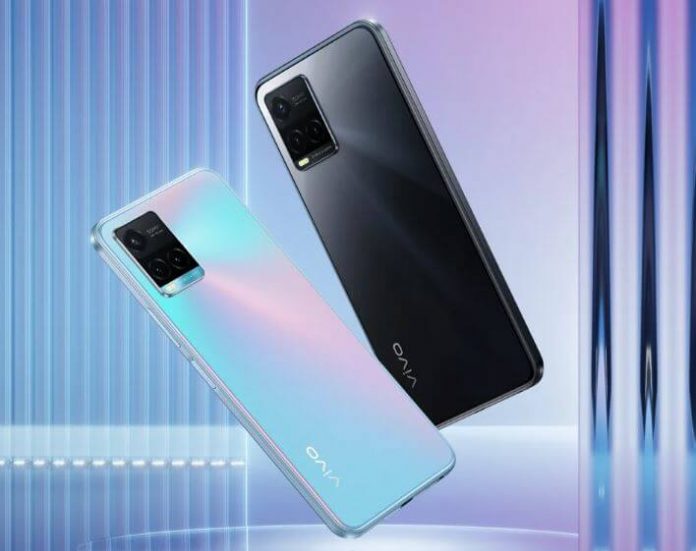 Vivo Y33s sports a bigger screen, large battery, and a good processor. It has a good rear camera setup, and the smartphone’s battery life is great as well.

The display of the smartphone is 6.58 inches with an FHD+ resolution of 2408 x 1080 pixels. It is an LCD with a capacitive multi-touch screen. The smartphone has protection from the blue light as the display is built with a blue light filter. Likewise, it has a screen-body ratio of 90.6%.

Vivo Y33s has thick bezels around the display. It offers a notch housing the front camera, whereas the rear camera is inside a rectangular module. On the rear, it has a branding of VIVO at the bottom.

The smartphone has a slim and trendy design. Vivo Y33s is available in two colors: Mirror Black and Midday Dream. The black color has a glossy sheen and hidden texture, resulting from the double layer coating technique.

On the other hand, the Midday Dream has an embossed AG texture with a frosted feel. It has a liquid crystal coating, which resists fingerprint smudges.

Vivo Y33s supports fingerprints for biometric authentication. It is side-mounted. Additionally, the smartphone also supports Face Wake to unlock the smartphone. Similarly, a 3.5 mm headphone jack and NFC are also available in the smartphone.

The processing power of the Vivo Y33s comes from Helio G80. It has two Arm Cortex-A75 operating up to 2GHz and six Cortex-A55 clocking up to 1.8GHz.

Multi-Turbo 5.0 in the smartphone enhances data connection, processing speed and helps in power saving. It has a liquid cooling solution to keep the Vivo Y33s cool during intense combat.

The processor further combines with 8 GB of RAM; RAM is extendable by an additional 4 GB. Likewise, the internal storage of Vivo Y33s is 128 GB; it is also expandable via a microSD card. The smartphone has a triple slot for two nano SIMs and a microSD card.

Vivo has given the responsibility of handling the graphics to the Mali-G53 MC2 GPU. The HyperEngine Game Technology enables dynamic management of CPU, CPU, and memory to sustain performance and longer gameplay.

Vivo Y33s boots on Funtouch OS 11.1 based on Android 11 out of the box. It has a clean design and a simple user experience.

A triple camera setup is present on the rear of the Vivo Y33s. It has a 50 MP primary shooter with a lens aperture of f/1.8. Likewise, the macro camera and a depth camera have a 2 MP sensor each, and the apertures of the lens are f/2.4. A rear flash accompanies them.

For video call and selfie, Vivo Y33s has a 16 MP front camera.

Vivo Y33s packs a 5000 mAh non-removable battery. The battery charges via a USB Type-C port. It supports 18W charging technology. The smartphone has Energy Guardian (VEG) to use the battery efficiently.

It also supports reverse charging, turning the smartphone into a mobile power bank.

Apex Manakamana and Cellucity Pvt. Ltd. look after the distribution of the Vivo phones in Nepal as the authorized distributors. You can buy the smartphone once or when it launches here in Nepal.

Meanwhile, check out some of the other Vivo smartphones available in Nepal, such as Vivo V21e, Vivo V21, Vivo Y1s, etc.