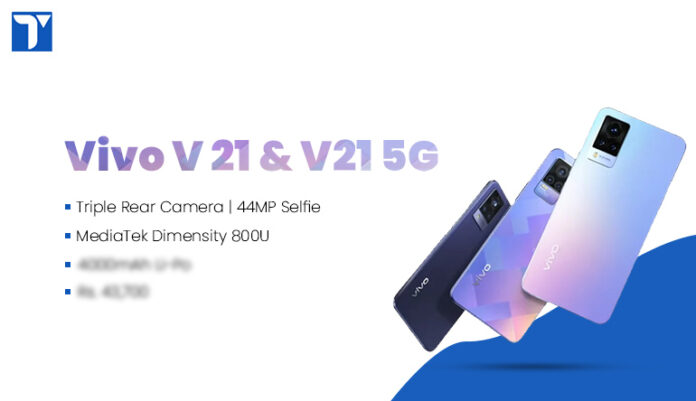 Vivo V21 and Vivo V21 5G are identical smartphones and differ only in terms of network connectivity. The smartphones are impressively thin and have impressive selfie cameras with OIS (Optical Image Stabilization).

Both the smartphones have a 6.44 inches FHD+ E3 AMOLED display, flaunting a 90Hz refresh rate. They also support HDR 10+. Similarly, the bezels around are very thin. The display has two LEDs embedded in the top to produce the flashlight during the low-light selfie.

The smartphones have a glass panel on the rear; the glass on the Artic White variant reflects almost all the color variants. It houses a triple camera on the rear and has a selfie camera inside a notch at the center. The sides are purely flat, and the camera bump is also absent.

The smartphones are 176 grams each. They have a hybrid SIM card slot; you can either use one SD card and another SIM card or two SIM cards at once. The smartphone models come in three color variants: Dusk Blue, Sunset Dazzle, and Arctic White.

The smartphones have both fingerprints unlock underneath, and face unlock.

The processing power of the smartphones comes from the MediaTek Dimensity 800U chipset. It is a 7nm chip with two Cortex-A76 cores clocking at 2.4 GHz and six A55 cores clocking at 2.0GHz. The 5G model delivers a peak download speed of up to 2.3 Gbps, while the 4G model is slower.

The smartphones have two memory variants: 8GB RAM combined with either 128GB or 256GB memory variants. Likewise, the storage type is UFS 2.2, whereas the RAM type is LPDDR4x.

Vivo V21 and Vivo V21 5G run Android 11 based on Funtouch OS 11.1 out of the box. It has a virtual RAM feature, via which you can increase the RAM capacity by 3GB, offering a total RAM capacity of 11GB.

Both the smartphones flaunt the same camera setup on the front and rear. The rear camera has a triple camera setup consisting of a 64 MP primary camera, an 8 MP wide-angle camera, and a 2 MP macro camera. The primary sensor has an OIS (Optical Image Stabilization), producing stable pictures.

Videos from the rear cameras are recordable in 4K at 30fps and 1080p at 30fps. The smartphones also have dual-view mode and various other features.

Vivo V21 and Vivo V21 5G have a 44MP OIS (Optical Image Stabilization) sensor for the selfie camera; the selfie camera is the main highlighting feature of the smartphones. Due to the OIS and autofocus, they can produce a good picture even in the low light. They also have a spotlight selfie feature, with which you can take a decent selfie using the two LED flash modules.

Similarly, the videos from the selfie cameras are recordable in up to 4K at 30fps. However, the video lacks OIS.

According to the advertisement, the battery charges 63% in 30 minutes.

You can purchase the Vivo V21 from its authorized retail stores or online stores like Daraz. The smartphone is a perfect fit for those who adore taking selfies and wants a smartphone with a great selfie camera. The official national distributors of Vivo smartphones in Nepal are Apex Manakamana and Cellucity Pvt. Ltd.