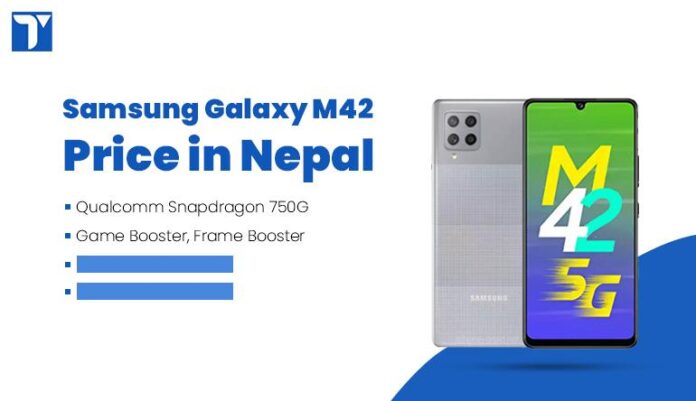 Samsung has introduced a new 5G model M42 5G, to its Galaxy M series. This is an enhanced version of Galaxy M42, previously launched in 2020. It will be the first device in the series that supports 5G connectivity and yet to launch in Nepal.

Galaxy M42 5G features a 6.6 inch Super AMOLED display with a 20MP selfie camera and a quad rear camera. It is powered by Qualcomm Snapdragon 750G chipset and carries a powerful 5000mAh battery.

M42 5G has a large dimension structure with a slim and sleek design. The back has a glossy touch with a layered pattern overlay with a square camera bump and an LED flash below it. There are two color variations: Prism Dot Black and Prism Dot Gray.

It flaunts a 6.6 inches Super HD+ AMOLED display with a resolution of 720 x 1600 pixels and an aspect ratio of 20:9. The front display panel has an Infinity-U notch that houses the selfie camera. It is suspected to have an in-display fingerprint scanner but unconfirmed.

M42 5G uses a Qualcomm Snapdragon 750G chipset instead of Samsung’s in-house Exynos chipset as used in M42. It is a 7nm chipset that features 2×2.2GHZ Cortex-A77 and 6×1.8GHz Cortex-A55 Octa-core processing. Snapdragon X52 modem has been integrated for 5G support.

It comes in two RAM variants as 6GB and 8GB, both with the same internal storage capacity of 128GB. Memory expansion is also available. It runs on Android 11 with One UI 3.1. Added Game Booster and Frame Booster features provide high gaming performance.

It has a 5000mAH battery that can last up to 36 hours of talk-time on a single charge. It comes with a 15W fast charger.

Redmi 8A Dual Price in Nepal : Next Budget King?