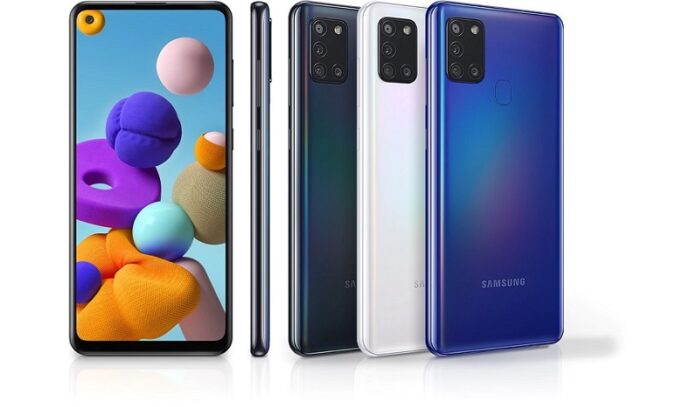 Launched back on 8th April 2020 Samsung has officially dropped the price of Galaxy A21s. It offers a 10% discount on Galaxy A21s which is Rs. 2500 in Nepal. Though the phone performs a little low when compared to Galaxy A31, the phone is significantly cheaper than this advanced mid-range model. To learn more about Galaxy A21s let’s take a look at its features.

Samsung Galaxy A21s is one of the cheapest smartphones with a quad-camera setup. Not only cheapest, but it also features a new Exynos 850 chipset which does not get lag on the normal usage of it it. The phone has a 5000 mAh battery and runs on Android 10 with Samsung UI.

The design aspects of A21s is similar to that of M31. Samsung Galaxy A21 is built upon the plastic back and plastic frame whereas at the front the phone is protected by glass. At the top left corner on front, you can find a punch hole housed for the selfie camera. At the back, the quad-camera is set up in a rectangular module. Likewise, the fingerprint sensor can be found next to it. I really think it would be much more attractive to users if Samsung had a bit different design to it.

Under the hood, Samsung Galaxy A21s is power-packed with Exynos 850 chipset. It is the first mid-range smartphone with the use of 8nm architecture in it. The performance is good for basic usages like media consumption and all but for the heavy graphic, it might not be the best choice as the phone is supported by Mali-G52 GPU.

As with the memory, the phone paired with 3/4/6 GB of RAM and 32/64GB of storage. But only the 4/64 GB variant is available in the Nepali market. The storage is also upgradable using a MicroSD card.

As for the front, the phone has a 13MP lens with autofocus on it. The phone lets you take the videos at 1080p from both front and back cameras.

The new Galaxy A21s gets a boost in terms of the battery. It contains a 5000mAh Lion-battery.  The giant battery provides sufficient juice throughout the whole day of usage. And whenever the battery dies, it can be recharged again with the 15W fast charging.

Officially, the Galaxy A21s was launched in Nepal at the price of Rs.24,999. However, now Samsung Nepal has dropped the price of the Galaxy A21s to Rs. 22,499 offering Rs.2500 cashback to the users. The phone can be purchased through any authorized retail shops in Nepal.

A whooping Rs.22000 cashback on Samsung Galaxy S20 Plus in Nepal