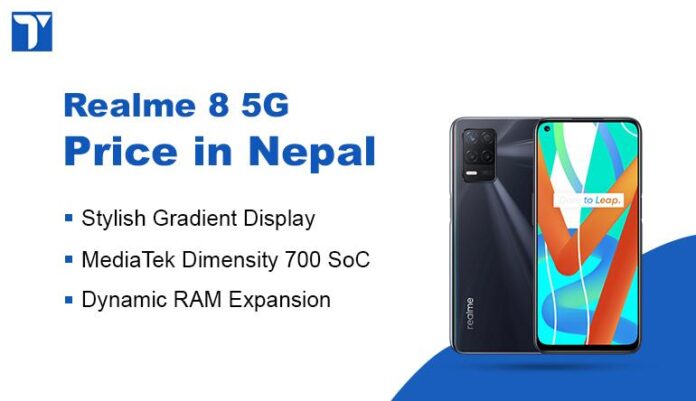 Realme 8 and Realme 8 Pro series were launched in Nepal recently. The company has confirmed its new variant, Realme 8 5G. One of the most popular mid-range flagship killer phones, the Realme 8 5G comes with some notable features and specification updates.

Realme 8 5G is a new addition to its Realme 8 series and an adaptation of Realme V13 5G, launched in China a month ago. It features a 48MP triple camera and a 16MP selfie camera. The MediaTek Helio G95 chipset has been replaced with Dimensity 700 processor for enhanced performance. It carries a 5000mAh battery with high durability.

It has a sleek and slim shape with the new futuristic infinite bold design. Realme 8 5G has a thickness of 8.5mm and weighs 185g, which you can comfortably hold and carry in your hand. It has a glass front with a plastic frame and a back panel based on high gloss indium plating for an extra shine.

Realme 8 5G is powered by MediaTek Dimensity 700 SoC chipset based on 7nm TSMC processing with 2x 2.2 GHz Cortex-A76 and 6x 2.0 GHz Cortex-A55 cores. It is available in two RAM variants of 4GB and 8GB with the same internal storage of 128GB.

It operates on Realme UI 2.0 based on Android 11. The 5G connectivity aids to boost the highest download speed up to 2.77 Gbps.

Realme 8 5G doesn’t offer the same camera setup as other series members. It comes with a triple rear camera, excluding a wide-angle camera, unlike the 4G variants. It has a 48MP primary camera and a 2MP macro sensor, and a 2MP Black and White sensor. It still has a large LED flash. A 16MP front camera is attached for a selfie.