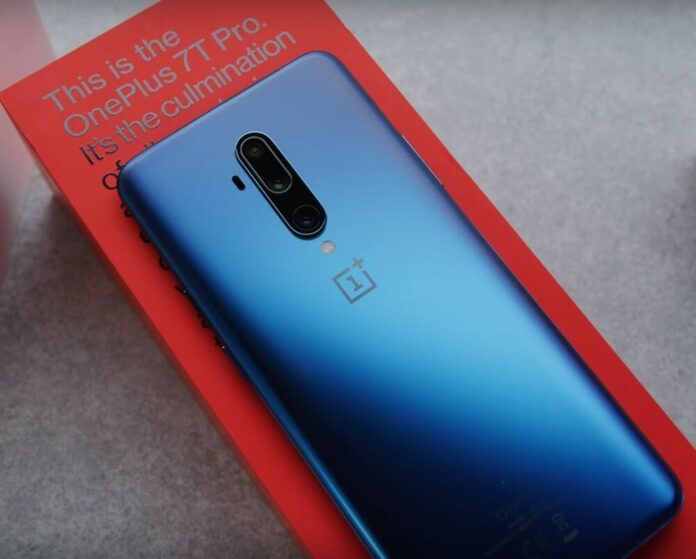 OnePlus 7T Pro brings a very insignificant upgrade over its predecessor with minor improvements over theoretical performance, macro camera, and slightly faster charging. However, it is still one of the best flagship smartphones with decent value for money, unless you already own an OnePlus 7 Pro.

In terms of design, the phone is almost identical to the OnePlus 7 Pro. The body of the device is made from a glass back and font with an aluminum side frame. The back panel has a matte finish with a single color option of Haze Blue.

It also inherits the pop-up camera module to house the selfie camera of the device so, the display does not feature any notch or punch hole cutout. Speaking about the display, it is a 6.67 inches Fluid AMOLED panel with a slight curve and a refresh rate of 90 Hz. It has a QHD+ resolution of 1440 x 3120 pixels in an aspect ratio of 19.5:9.

The phone brings an upgrade to the processor with OnePlus 7T Pro being powered by the latest Qualcomm Snapdragon 855+ chipset with Adreno 640 GPU, which is also used in OnePlus 7T. It is available in the memory configuration of 8 GB RAM with 256 GB of internal storage.

However, there is no option to extend the memory of the device as there is no support for an external SD card. As for the software, it runs on OxygenOS 10 based on Android 10.

It offers the same triple camera setup on the back of the device consisting of a 48 MP Sony IMX586 primary sensor of f/1.6 aperture, an 8 MP telephoto lens with 3X optical zoom of f/2.4 aperture, and a 16 MP ultra-wide camera of f/2.2 aperture. The primary lens and the telephoto lens features OIS to provide stability.

The selfie camera on the device is a 16 MP sensor with f/2.0 aperture, housed inside the motorized pop-up camera module. The rear camera setup is capable of recording up to 4K videos at 30 and 60 fps. However, there are some upgrades with the addition of macro mode and hybrid image stabilization in the device.

The device packs a 4085 mAH battery which is of almost equal capacity to that of the OnePlus 7 Pro. There is also support for Warp Charge 30T, which the company claims to be 23% faster than the previous generation. It can charge the device to 70% in 30 minutes.

For biometrics, it offers an in-display optical fingerprint scanner and face unlock. It features a dual stereo speaker system for audio output.

OnePlus devices once known as “Flagship Killer” aims to compete against the flagship devices like Samsung Galaxy Note 10/ Note 10+. Although the OnePlus devices no longer come at a mid-range price, it still provides a decent value for money.

Huawei Y9s With Pop Up Selfie And Bezel-less Display Launched In...