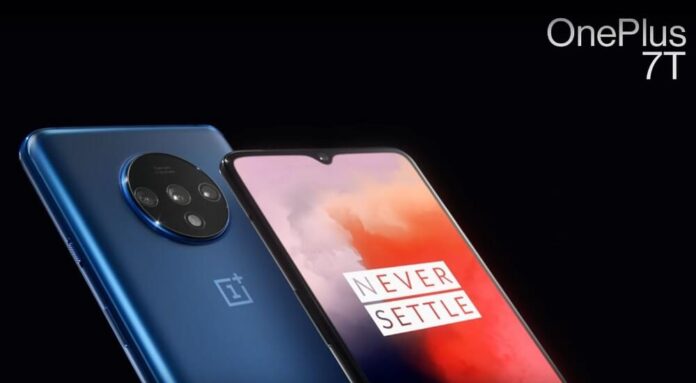 OnePlus 7T is the latest addition to the OnePlus 7 series lineup which includes the vanilla OnePlus 7 and the OnePlus 7 Pro. OnePlus 7T bridges the gap between the two devices. Although the phone was launched internationally on September 26, 2019, it has just made its way to the Nepali market after 3 months.

The device was officially launched by iHub the authorized distributor of OnePlus devices in Nepal. The phone is officially priced at Rs 67,000 for the base variant with a configuration of 8 GB RAM with 128 GB of internal storage.

OnePlus 7T bridges the gap between the features provided by the Pro and non-Pro variant. It brings considerable upgrades to the lineup including the design of the device.

The device features a new circular camera bump on the back that houses the triple camera setup. Since the display is larger than the OnePlus 7, the phone’s body is also slightly taller. The device does not have an IP rating, but it does come with a rubber seal on the SIM card tray, charging port, and speakers to prevent water from seeping in.

OnePlus 7T offers a 6.55-inch AMOLED display with an FHD+ resolution of 2400 x 1080 pixels in an aspect ratio of 20:9. As mentioned earlier, the display is slightly taller than the OnePlus 7 which has an aspect ratio of 19.5:9. The display has a refresh rate of 90 Hz and a maximum brightness of 743 nits. The screen has a waterdrop notch to house the selfie camera.

OnePlus never fails to deliver on performance by using the latest flagship chipset on their devices. The same goes for the OnePlus 7T. It is powered by the Qualcomm Snapdragon 855+ processor and Adreno 640 GPU. It is available in the memory configurations of 8 GB RAM with 128 GB or 256 GB of internal storage. However, there is no support for extending the storage using an external SD card. As for the software, it runs on OxygenOS 10 based on Android 10 out of the box.

OnePlus has brought a new circular camera module on the back which houses the triple camera setup consisting of a 48 MP Sony IMX586 primary sensor with f/1.6 aperture, a 16 MP ultra-wide sensor with f/2.2 aperture and 117-degree FOV, and a 12 MP telephoto camera of f/2.2 aperture. Upfront, the selfie camera is a 16 MP sensor of f/2.0 aperture.

The rear camera of the device can take up to 4K videos at 30 and 60 fps. The rear main camera also features OIS for a stable video recording.

The device packs a 3,800 mAH battery with support for Wrap charge 30 T, via USB Type C port. The company claims the charging speed is 23% faster than the 30W Warp charge and now the device can charge to 70% in 30 minutes.

For biometrics, the device offers an in-display optical fingerprint sensor and Face Unlock technology. It features a dual speaker stereo setup but misses out on the 3.5 mm headphone jack.

The OnePlus 7T has finally come to Nepal after 3 months of the phone’s announcement internationally. The official price of the phone in Nepal for the base variant with an 8/128 GB configuration is Rs. 67,000. Considering the features it offers, it is very well priced and one of the best deals at this price range.